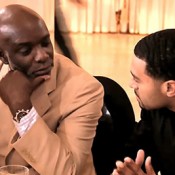 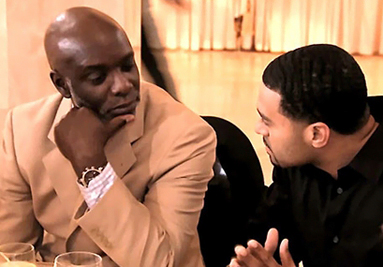 Last night’s episode of The Real Housewives of Atlanta had another fight on-air – except this time it wasn’t with the ladies.

Kim Zolciak’s baby shower ended with a band when two of the “househusbands” got into a heated argument.

The argument started over an interview Peter gave to Uptown Magazine where he dissed all of the housewives and claimed he didn’t “like” Phaedra.

Apollo started getting defensive when Phaedra asks Peter about the article.

The men are seated next to each other when Peter makes a comment that Apollo looked like he had something to say..

Apollo goes off about disrespect and Peter comments that at least he isn’t getting “pulled over’ while Apollo fires back by telling him to get his money “up.”

The fight escalated until security walked over to the table and Apollo maturely exits the building before it gets physical.

Watch the scene below –

Was Phaedra wrong for bringing up the article? Who do you think would have won if the fight escalated?