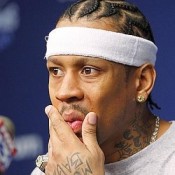 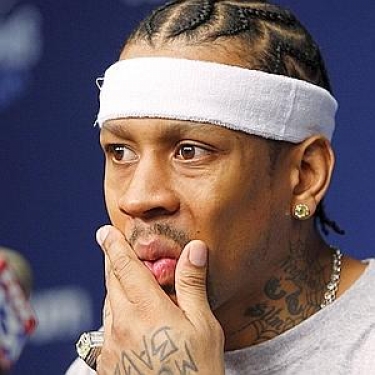 Allen Iverson estranged wife Tawanna Iverson claims he left her penniless after she filed for divorce.
From TMZ:

Tawanna just filed new docs in their bitter divorce battle — claiming ever since she filed for divorce in June, Allen stopped depositing money in their joint bank account … and then made several large cash withdrawals, including one for $20,000 … which he spent on diamond jewelry.

Tawanna claims the account was $23,000 in the red at the time she filed the court docs — and she’s been unable to pay the bills … or provide for their 5 kids.

According to Tawanna — who says she gave up her career to be a stay-at-home mom — Allen is worth over $20 million … and refuses to help her out simply out of spite.

Allen denies Tawanna’s allegations in the docs — and since they’re at a stalemate … the judge will have to play peacemaker.  So far, no hearing date has been set.

The couple have five children, so I’m sure that’s not an easy task to manage alone.

It’s so sad when these stars step out on their responsibilities to their children…because of beefs with the woman they chose to bear their children.