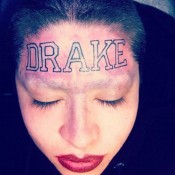 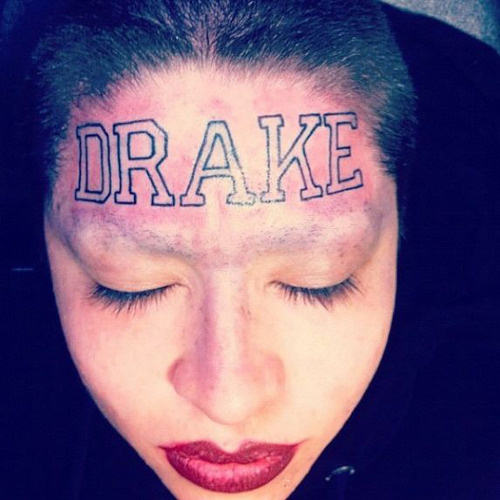 The lyrics to Drake’s popular song, “Free Spirit” featuring Rick Ross have come to life for one crazed stan.

Kevin Campbell, the tattoo artist who “tatted” the name of hip-hop’s most emo rapper on a woman’s forehead, talked to VICE about this now infamous fan.

How did you react when she told you what she wanted done?

The funny thing is, I didn’t know who Drake was, I figured it was her hood or some shit, not some goofnugget R&B dude.

Did she talk about what it meant to her? Had she been planning for it for a long time or was she kind of just like, “put it on my forehead” and that’s it?

Yeah, she was really psyched about it. She had the font all picked out on her iPhone ready to go and was pretty adamant about putting it on her forehead. She didn’t say a word about what it meant to her, some of the guys at the shop asked her, and she just kinda giggled at them. When I printed up the first image of the lettering, she wanted me to go bigger, so that it went pretty much from each side of her hairline to the other. I thought she shaved her eyebrows for the procedure, so when I put the stencil on the first time, it was right over her (missing) eyebrows, but she had me enlarge it a bit and push it up towards the hairline. But yeah, she acted as if she had planned it out for a while; though I’m not really sure how much extended coherent thought could actually go into getting such a stupid tattoo on your forehead.

I wonder what was going through her mind when she decided to do it.

Man, I wish I could get you in touch with her, I’m sure the story’s pretty intense. Sadly she didn’t leave a number on her consent form, just her name. But she is supposed to be coming back to finish the tattoo once it heals (she only had enough money for the outline) and I could probably talk to her then. She was on a pretty good one when she came in, and I think by the time I finished, she was coming down, because her attitude changed pretty drastically once the tattoo was finished.

Read the interview in its entirely at VICE

People never get a tattoo when you’re under the influence of anything, because when you wake up…it will still be there.

I’m wondering what her employment prospects are looking like….

Did this fan go too far?