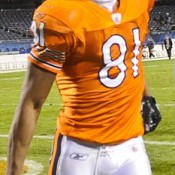 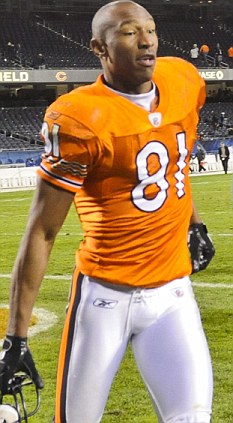 Chicago Bears wide-receiver Sam Hurd was arrested in Chicago after trying to buy a pound of cocaine from a Homeland Security federal agent.

Police are claiming he’s one of the top dealers in Chicago and even supplies other NFL players.

So I guess the NFL had their own lil’ “candyman.” SMH.

He allegedly told the agent that he was interested in buying five to 10 kilograms of cocaine and 1,000 pounds of marijuana weekly to distribute in the Chicago area.

The agent claimed Hurd said that he and another person were already distributing approximately four kilos of cocaine weekly, but needed a new supplier that could meet their demand.

While his partner handled most of their drug deals, Hurd allegedly told the agent he was responsible for the ‘higher-end deals.’

Hurd left the meeting with the undercover officer after he agreed to pay $25,000 for each kilo of cocaine and $450 per pound of marijuana.

He said that he could pay for a kilo of cocaine after ‘he gets out of practice.’

“Sam intends to fight these charges, and we intend to defend him fully… we have complete confidence in him.”

Hurd spent five seasons with the Dallas Cowboys before signing a $5.15 million three-year deal with the Bears in July.

When will these boys learn? It’s unfortunate that he chose to do this – after signing on for a professional football career. There are so many more options…when you have access to the resources. I’m definitely disappointed.

Should Sam Hurds be suspended from the NFL before his trial?