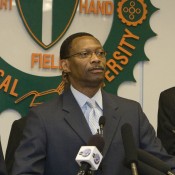 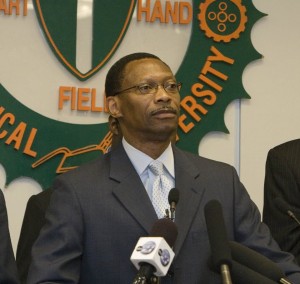 FAMU continues to deal with the fallout over a drum major’s suspected hazing death.

A board that oversees Florida’s public universities has started an investigation into whether school administrators did enough when hazing was brought to their attention.

University President James Ammons may be ousted at the board’s recommendation.
“I haven’t had much time to think about myself,” said Ammons, who became president of his alma mater in July 2007. “At this minute, I’m still the president of the university. But we’ll wait and see what the determination of the board is.”
School officials said Wednesday that four students who were expelled for their role in what is believed to be the hazing death of Robert Champion have returned to classes because the investigation is not finished. The status of band director Julian White also changed. He had faced termination Dec. 22 but is now on administrative leave with pay, FAMU attorney David Self said during a break in meetings of the school’s board of trustees in Orlando.

The Florida Department of Law Enforcement asked the university to stop any disciplinary action until a criminal investigation into Champion’s death is done.

I’ll keep you updated as the story develops.

The  8-4 reprimand vote at a meeting in Orlando came in place of a motion to put FAMU President James Ammons on administrative leave until the criminal investigation into drum major Robert Champion’s death is done. Detectives are probing the role of hazing in the Nov. 19 death.

Do you think that the FAMU president should be fired?