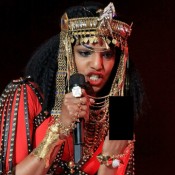 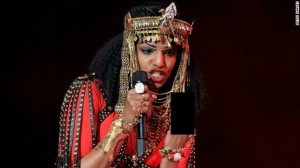 It wouldn’t be the Super Bowl Halftime Performance without a scandal!  That’s right, just as the Super Bowl allows the first female performance since the 2004 Janet Jackson incident, something goes terribly wrong.  What happened?  A flying finger!

Singer Madonna promised there would be no “wardrobe malfunction.”  But no one could have anticipated what Rapper M.I.A. had up her sleeve.  She flipped cameras the bird Sunday night during a performance of the new single, “Give Me All Your Luvin’.”  The NFL and the broadcaster, NBC immediately apologized for the mishap.

“There was a failure in NBC’s delay system,” said Brian McCarty, the league’s vice president of communications. “The obscene gesture in the performance was completely inappropriate, very disappointing, and we apologize to our fans.”

“The NFL hired the talent and produced the halftime show,” NBC said. “Our system was late to obscure the inappropriate gesture and we apologize to our viewers.”

The “spontaneous gesture,” was also accompanied by “I don’t give a sh*t,” uttered by MIA.  Madonna has not issue a comment.

After the Jackson-Timberlake showstopper, the halftime show largely relied on classic rock artists such as Paul McCartney, Bruce Springsteen, The Rolling Stones, The Who and Tom Petty.

Did this middle finger malfunction mess it up for future Super Bowl music acts?  Weigh in…