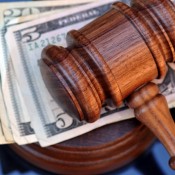 Everybody knows, when you have (unprotected) sex – you can get pregnant.  What people don’t always think about is that after that baby is born, you’ll have to pay.  No, literally! You’ll have to pay!

It’s called Child Support…ever heard of it?
The child support program currently serves approximately 17 million U.S. children, or nearly a quarter of the nation’s minors, according to a study by Elaine Sorensen, a senior fellow at the Urban Institute.

An analysis of U.S. Bureau of Justice statistics in 2002 by the Urban Institute’s Sorensen found that approximately 10,000 parents were in jail for non-payment of child support, representing 1.7 percent of the overall U.S. jail population

Thousands of parents are jailed each year in the U.S. after failing to pay court-ordered child support.  Many of those jailed individuals selfishly withheld the court ordered money out of spite or a feeling that they’ve been unfairly ordered by the courts. However, in a world
where the good often outweighs the bad, there are actually some great people in the world who are willing to pay the money but can’t afford to pay!

Some protestors are claiming that many parents are wrongly being locked away without any regard for their ability to pay.  Their argument is throwing them in jail because of their inability to land a job, therefore lack of financial means to pay child support is not
fair.

Army Veteran Lance Hendrix of Georgia shares these very concerns. Hendrix is a single, divorced parent whose ex-wife cheated on him while he was away serving the country.  Upon arrival back to the states, he filed for divorce.  He has maintained shared custody of
their young daughter but finds it difficult to make the child support payments that have since started.

“Instead of locking people up, [the state] should give people jobs.  Or attempt to find them because a lot of people can’t find jobs.  If somebody can’t do the job and doesn’t want to do the job then they should be the ones going to jail. Not the ones willing to go to work.”

We as American citizens tend to gravitate towards the mothers’ side on this issue.  Generally, despite shared custody, the mother is expected to take full care of the child.  Why?  Because women are assumed to be more nurturing and mothering appears to come naturally to them.  We tend to feel as though legal ramifications should be taken to make sure that mother has all she needs from the father to care for that child.  After all it took two to tango so he should be in this too.

Do you ever consider the father’s situation?  What if he isn’t a dead beat parent like the news so often likes to portray.

What if they are good honest parents trying to make a better life for their kids but simply can’t afford to do so?!  Is jail time really the answer? Sound Off!