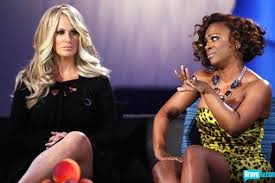 You guys remember the wildly popular and made fun off song “Don’t Be Tardy for the Party” Real Housewife of Atlanta star, Kim Zolciak did? Do you also remember what she sounded like before fellow housewife star Kandi, made her sound tolerable to the ears? Right. Well if you recall or are a fan of the show, you know that Kandi has confessed that Kim barely gave her anything  for producing the song. In the past she seemed to have just let it slide since they were “friends” but now she’s attempting to claim what’s rightfully hers. According to Black Media Scoop, Kandi is suing Kim for the money she owes her.

According to BMS, Kandi says she deserves at least half of Kim’s estimated $100,000 earnings from the song. However, she may have a tougher time trying to get it since Kim said there was never a written agreement between the two. BMS says that Kim is claiming that Kandi is only bringing it up now because her spin-off show is about to debut. Even though the issue has been brought several times in the past on RHOA reunion and other TV shows.

I’m not one to crush anyone’s dreams, but Kim was never the world’s best singer. If this were American Idol, she wouldn’t have made it past the first audition and she probably would have been on of those hysterical girls cursing and crying into the camera all mad at the world and what not. BMS reported that Kandi confirmed her lack of skills by tweeting “The original version of that song was a joke. Not what people bought. The only thing that’s the same is the title.”.

If Kandi wasn’t smart enough to get a written agreement from Kim then shame on her, but I still think she deserves her cut for making the song what it is today. In the video above, Kandi said she only received $3,000-4,000 for her work and hasn’t seen a dime more. Kim was wrong from the jump for not giving her all of her dues for all her trouble.

Do you think Kandi will win the lawsuit? Be honest, how far do you think the song would have gone if it were released with Kim’s raw voice (no auto-tunes)?