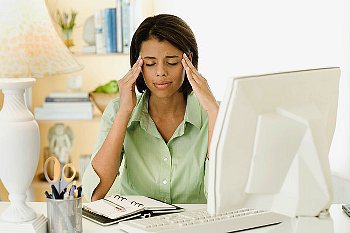 Many of you may think that your family, church or friends are stressing you out but according to a new survey, 83 percent of Americans are now pulling their hair out over their jobs. According to the Huffington Post, last year, stress levels for American employees was 73 percent. It’s since jumped 10 percent. “Only 17 percent of workers said that nothing about their jobs causes them stress”. We should all take our own survey to see what they do!

After reading that, you may be saying, “these folks should just be grateful they have a job in this economy”. However, you may want to retract that statement because now it seems like being unemployed is just as stressful as being employed, because people often have to adjust to being underpaid, overworked and sometimes deal with hazardous working conditions, not to mention all the factors that accompany a job like managing bills and family obligations. What I hear after reading this is less money, more problems.

Poor compensation and an unreasonable workload were tied as the No. 1 stressors, with 14 percent of workers reporting low paychecks as their main source of work-related stress. Fourteen percent also ranked a heavy workload as the top stressor — up from 9 percent last year. These concerns were followed by frustration with coworkers or commutes (both 11 percent), working in a job that is not one’s career of choice (8 percent), poor work-life balance (7 percent), lack of opportunity for advancement (6 percent) and fear of being fired or laid off (4 percent).

Let’s look at it from another prospective. We’ll apply the stress at work to your home life and relationships. Don’t you think if you’re barely keeping your head above water at the office that some of that weight is going to follow you home and drop on the most unsuspecting people, your loved ones? You may not mean to do but sometimes you just explode on the people closest to you, which isn’t fair but it happens. If you keep shaking a soda bottle, once you open the cap it’s going to explode.

How do I try to maintain my stress levels Dr. O? Here are a few that I think will help.

If hope this article was helpful. Remember, we only get one life. We don’t want to waste it by being too stressed to enjoy it.