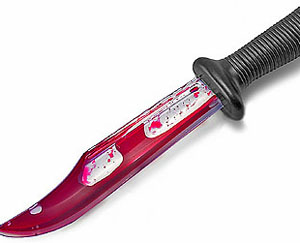 “Hell hath no fury like a woman scorned!” I don’t know how many times, how many more ways I can reiterate the consequences of cheating. Cheating, one of the ultimate forms of betrayal, may be “good” in that particular moment but it’s never good for anyone in the end, as the gentleman in this video has probably learned.

From the video we learn that there was some sort of altercation between the victim and his alleged, unidentified attacker that’s believed to be his (former, now I’m sure) girlfriend. It’s not hard to imagine how this took place. The guy is at the court playing ball with his buddies. They’re having a great time, his team is winning and then all of a sudden, his girl drives up. She confronts him about a text she saw and “evidence” she found in his pockets. He tries to lie and say “Babe, I don’t know what you’re talking about”. She acts like she’s about to walk off and go home but whips her (and this is no pocket knife in the guys back) blade and throws it at his back with perfect aim and precision (if you notice, the knife looks as if it’s directly in the middle of his back)!

While an extreme reaction, I can’t say that I’m fully surprised. Discovering that your partner has stepped out on you will probably evoke emotions you’ve never had and actions you wouldn’t normally do, like trying to stab someone. You’re heartbroken, angry, confused, sad and are unable to fully process the consequences of your behavior at the time. I recently informed you on popular Gospel singer and one half of the Mary Mary group, Tina Campbell, reveling to Ebony magazine that she too attempted to stab her husband (several times) after learning of his infidelity. A crime of passion to the fullest. One of those “if I can’t have you nobody will” type scenarios.

But back to the video, while as of now it’s unclear of the condition of the cheater, I’m concerned that out of all those witnesses in the park, everyone seemed to be more interested in capturing the video and taking pictures instead of than actually tending to the stab wound victim. But that’s the world we live in now. Record now , and call for help later.