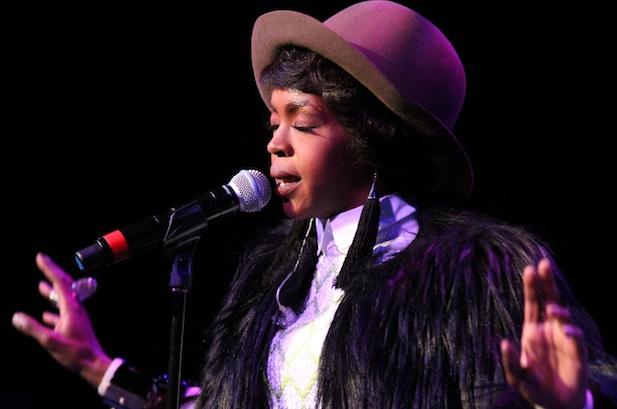 Oh…my…GOSH! Lauryn Hill IS  going to jail yall! As it turns out, the Grammy winning artists’ record deal with SONY, was not enough to pardon her for her over one million dollar tax evasion case, so she’s headed to the big house! While Hill does have a deal with the company, the amount believed to save her from doing time and other details was incorrect.

According to USA Today, the 37 year old mother of seven, initially faced up to year behind bars for each of the three counts against her. That’s the thing about Uncle Sam, if you don’t pay him, he’ll come back for you with a vengeance! “Hill received more than $1.8 million in income during 2005, 2006 and 2007 but didn’t file tax returns during that time”.  USA Today reports that Hill received a total of 2.3 million dollars during the five year span that she failed to pay her taxes and had an “unpaid tax total of $1,006,517” before she she decided to catch up. She’s paid more than $970,000 on her debt. Unfortunately, that’s not gonna save her, her ship is still gonna sink.

Hill received more than $1.8 million in income during 2005, 2006 and 2007 but didn’t file tax returns during that time. Although her guilty plea specifically related to that three-year period, Fishman said her sentence also took into account additional income and tax losses for 2008 and 2009, when she similarly failed to file tax returns. The sentence also addressed overdue New Jersey state taxes.

I was really relieved when I thought Ms. Lauryn had dodged this bullet. She’s a mother of seven, has been living a pretty quiet life (until now) staying out of the public eye and living in New Jersey. Come to find out, she was just quietly breaking the law. I don’t know of nor have I ever heard of anyone who LIKES to pay taxes. I mean, who likes to give away the money they earned involuntarily? And maybe she fell on a few hard times but you can’t just ignore the law altogether. I’m sure she could’ve put together a payment plan! But guess what America, her in the “land of the free”, we’re required to pay taxes in order for this system to work and the more money you make, the more you have to dish out. It’s best to just file on time, with ALL your ACCURATE information to keep Uncle Sam off your back. Sure you may get away with one year of not paying, you may even slide by for two, but as Wesley Snipes and now Lauryn Hill know, they will find you, and make you pay one way or another.

To avoid this sink hole of a money pit, FILE YOUR TAXES, PERIOD. Don’t go see Deacon Johnson in the church’s basement or some guy you know who’s good at math. Use the professionals (Jackson Hewitt, H&R Block, etc) that’s why that whole profession was created.

How to avoid “Tax Issues.”

By now, I know you’re probably wondering how much time Lauryn got. Well, here it is, drum roll please….USA Today reported that she was sentenced to three months in FEDERAL prison, in addition to “three months of home confinement with electronic monitoring after the prison term”. The bars will close behind her on July 8 at an undetermined location.

I guess that SONY deal was too good to be true, but we won’t take our eyes off you. Spend your remaining time with your kids, make arrangements for their care and pay your taxes from now on Ms. Hill.