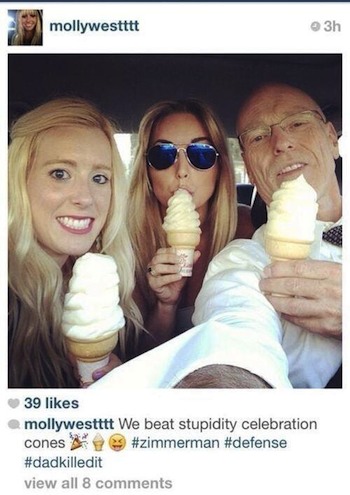 It was a sad day on Instagram when Defense Attorney Don West’s daughter posted a picture of her father eating victory ice cream cones after the cross examination of star witness Rachel Jeantel.  In the caption she stated that her father beat out stupidity.  Attorney West’s daughter was referring to Rachel as being stupid.  So far this young lady has been drug through the mud by the media and public.  People have made negative comments about her weight and appearance.  After word was released about the picture Molly West immediately disabled her Twitter and Instagram page.

Many people were enraged because this “privileged child” has no clue of the seriousness of this case.  A 17 year African American boy was murdered.  Molly had the audacity to even but a hashtag #DadKilledIt.  It never ceases to amaze me at how ignorant the youth of today can be, due to the lack of parental guidance.  As an educated father with a terminal degree it would behoove Attorney West to inform his children about social consciousness.   It seems to me that this young lady needs to spend some time doing charity work and volunteer with some less fortunate people to humble her attitude.

Now the media and public are having a field day with Molly West.  I personally do not feel sorry for this young lady because she brought this on herself.  This act showed a total disregard and inconsideration for the parties involved in this case.

“As a parent, we’re not always proud of things our children do, but we love them anyway, and then we move on.”
Read more: http://globalgrind.com/news/george-zimmermans-attorney-don-west-selfie-daughters-instagram-photo#ixzz2Xo3N0vUI

“[West] was doing something he does almost every day, an old tradition with his daughters. They went out for ice cream. Don had no idea that she’d post it on Instagram… The girls like to make fun of their dad frequently.”

Let me know what your thoughts are? Is the media being to harsh on young innocent Molly West? or Does she deserve the backlash that she is currently receiving?