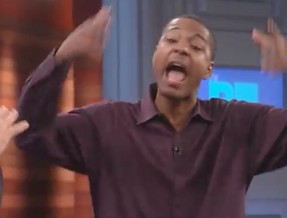 OMG Moment! Man comes out the closet during TV. Show a down-low brother is the lowest form of life there is. He has sex with men and woman and usually doesn’t tell either about his bisexuality. A down-low brother will have sex with them then pass them on the street when he’s with his woman and pretend he doesn’t see them. Women despise a down-low brother because he’s not only two-timing them, but you never know what he’s going to bring back into the bedroom. So, smoking out a down-low brother is vitally important sometimes a matter of life and death. The aids epidemic is growing more and more each day due to people not being honest with themselves and the people that they sleep with.

“What’s done in the dark comes to the light” is a phrase commonly used for people who choose to lie. However lying about a Sexually transmitted disease is no joking matter testing positive for HIV can completely change a person’s life many people become very depressed and feel as though there is no reason to live with what they have. Although I feel as long as you can breathe there is always a reason to live. You never know what the next day will hold and just because you have a disease does not mean that your life is over. In some situations some people just chose not to take safety precautions and chose to sleep with a person they barely knew. In those situations it’s like only thing to do is learn from that and try and be beacon of light to others to do the right thing as far as knowing who you sleep with and taking safety precautions. One night of pleasure can lead to a lifetime of pain and agony. However your life is what you make it you have to be willing to make change. Your happiness comes within you and the steps taken not what everyone else is doing!