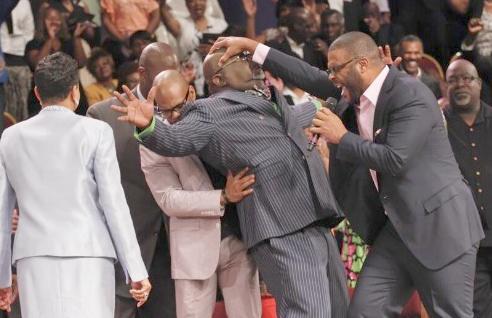 The Madea Creator Tyler Perry lays hands on Bishop T.D. Jakes! Many are calling him anointed and the critics calling it false prophecy! Tyler Perry appeared and Bishop Jakes church and said “I’ve been touched to give $1 million” For Tyler Perry to actually lay hands on a Bishop is a big thing to the church/black community. Bishops are looked upon in high regard and at the top of the food chain hypothetically speaking when it comes down to church title or positions. That’s why a lot of people have their eyebrows raised to this situation. Allegedly, the word on the street is that maybe since Tyler Perry is donating $1 million dollars Bishop Jakes and most church members don’t have a problem with the prophesying. However on the other hand many say looking at where Tyler Perry has come from to where he is now there is definitely a anointing in him and being that said he is worthy to lay hands. That there is no age, size, or image!

In 2011, Forbes named Perry highest paid entertainer to come from being homeless says a lot! Perry was born in New Orleans, Louisiana, as Emmitt Perry, Jr., the son of Willie Maxine Perry (née Campbell) and Emmitt Perry, Sr., a carpenter. He has three siblings Perry once said his father’s “answer to everything was to beat it out of you”. As a child, Perry once went so far as to attempt suicide in an effort to escape his father’s beatings. In contrast to his father, his mother took him to church each week, where he sensed a certain refuge and contentment. At age 16, he had his first name legally changed from Emmitt to Tyler in an effort to distance himself from his father. To come from a pretty rough past Perry has definitely been anointed to get to where he is today. With all this being said do you think Tyler Perry was “worthy” to prophesy to Bishop T.D. Jakes or not?