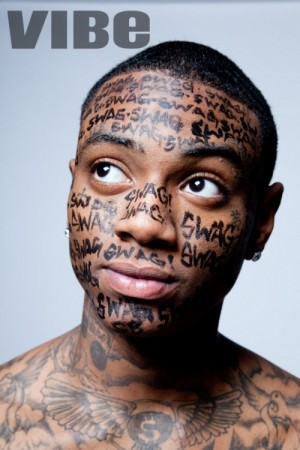 I’m SURE that most of us with common sense have the same reaction to the photograph:

What in THE WORLD is on that boy’s face?!

Arguably famed rapper and rumored drug-addict Soulja Boy Tell’em needs to be honorably discharged. In celebration and promotion of his “ingenious” creation of the term “Pretty Boy Swag”, Tell’em (born DeAndre Cortez Way) thought it best to market his creations by allowing a “makeup artist” to write “SWAG!” all over his face as he posed for VIBE Magazine.

For those who don’t know, according to UrbanDictionary.com (because there is no formal definition of it), ‘swag’ is best defined as “appearance, style, or the way one carries himself/herself”. A more formal, mature term would be “savoir-faire”.

Now, whether this face-painting fête was OK’ed by his agent or not is beyond our knowledge (wanna bet it wasn’t???). Even more, VIBE’s creative and editorial direction needs a serious overhaul. The same publication which used to bring you flavorful and honorable content about the hottest rappers now has down-spiraled into absurdity, first with the “Mean Girls of Morehouse” article, and now by allowing this buffoonery in the sheets of their issue.

This isn’t the “Crank Dat” artist’s first time flopping in the media. After getting put on blast for being an alleged “cokehead” by hip-hop groupie Kat Stacks in August, Soulja Boy’s luck ran thinner by posing with rapper 50 Cent in a disturbing, BDSM-parallel of a portrait for XXL Magazine (pictured right). It looks just a tadbit homosexual, you think!

Now…with this stunt of  photo shoot, even RollingOut.com views Soulja Boy’s image as “increasingly becoming reminiscent of a blackface entertainer who performed in minstrel shows during the 19th and early 20th century”.

Perhaps he’s mentally disturbed, a victim of substance abuse or becoming easily influenced through members of his camp (and with ‘Fiddy’ by his side, he’s sure to go off the deep end). But who’s allowing him to continue this behavior? And is anyone telling him ‘no’ or ‘stop’? Most likely not! Nowadays if you try to correct someone’s wrongdoing, you’re considered a ‘hater‘, a term that almost everyone tries to avoid like the plague. Even more, how does this type of behavior affect our children? Are our teenage sons going to start writing “SWAG!” on their faces too?

Someone help me out…PLEASE! Let me hear your thoughts!

Many forms of mimicked and influenced behavior can result in depression and anger issues, identity issues, anxiety and other unwanted mental problems. If you suspect your child may be headed for trouble, give them a step towards a healthier mind! Take the Dr. Owens Mental Health Prescreen Assessment and check their mental status today!