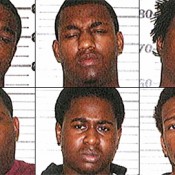 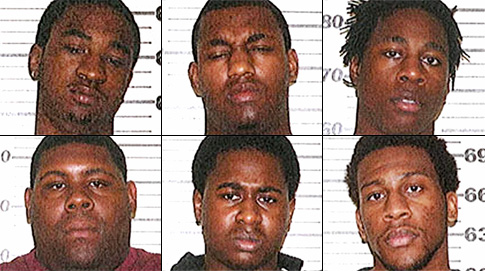 More than a DOZEN teens and men are believed to be involved in the nightmarish gang rape of an 11-year-old girl in Texas.

At least 16 people, ranging in age from 14 to 27, have been arrested in the past four months in the small town of Cleveland, 50 miles northeast of Houston.

“There have been leads during our investigation that have alerted us to other possible persons of interest,” Cleveland Assistant Police Chief Darrell Broussard told CNN. “The investigation is ongoing.”

The girl, whose name has not been released because of her age, told police at least 20 people attacked her last Thanksgiving. The vicious assult was caught on camera and video, authorities said.

Cops said he took her to an empty house and forced her to strip under threat of violence. Several other men showed up and each raped her.

The sickos then took the 11-year-old to an abandoned trailer, where they continued to have sex with her, as well as use cell phones to take pictures and record video.

“These guys knew she was in middle school,” the girl’s mother, identified only as Maria, told reporters.

“You could tell whenever you talked to her. She still loves stuffed teddy bears.”

The video quickly went viral, sparking arrests after the teens in it were recognized by fellow students. The victim, described as a troubled young girl, was also recognized by several people.

From New York Daily News
I am OUTRAGED at this story!!! An 11-year-old girl should not have been subject to such horrors, even if she was a troubled girl! We have to do more to protect our children. These men and teens are sick and not to mention PEDOPHILES! Also the fact that they DOCUMENTED this event is just OUT OF LINE. This story has reported tore the small community apart and the little girl is being held in child protective custody. I hope JUSTICE is served for this little girl and her family.
How do ya’ll feel about this story?