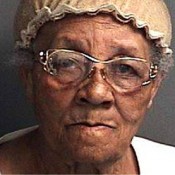 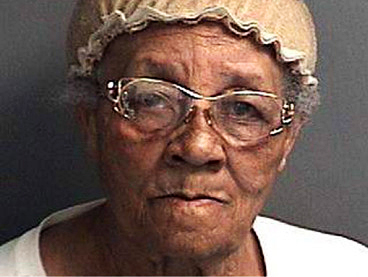 It’s hard out here for an old lady…at least that’s what 87-year-old Ola Mae Agee is telling officers.  This innocent looking senior citizen was taken in custody last year in Pensacola, Florida after she sold an undercover officer cocaine in the living room of her home.

According to the Pensacola News Journal, Agee was arrested and charged back in May 2010 by Escambia County officers and taken to jail but was released on her own recognizance because of her age.

But this is not the first time Grandma Ola has been taken in handcuffs.  Back when Agee was at the young age of 73, she pleaded no contest in December 1996 to possession of a controlled substance with intent to sell, manufacture or deliver.  She served a two-year probation, which ended in July of 1998 when she was 75 years old. Agee was again arrested in February of 1999 for possession of cocaine with intent to distribute, but the charges against her were later dropped.

In November 2010, a jury found the senior citizen guilty of one count of selling cocaine.  Agee was sentenced to 18 months in jail, however she could have been sentenced to up to 15 years in prison.

Agee is the true definition of the saying “O.G.”… old grandma, that is…
Source