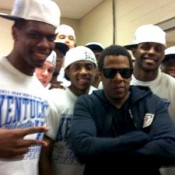 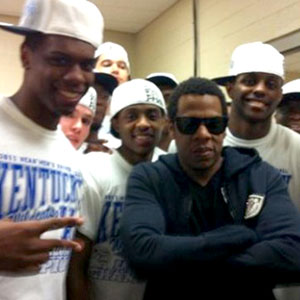 Beyonce’s superstar husband may have done a big Uh-Oh in the eyes of the NBA. Rapper Jay-Z who has hung with the likes of Oprah, Donald Trump and President Obama is under investigation for NBA recruiting violations.

Jigga, who is a part-owner of the New Jersey Nets, was spotted in the Kentucky Wildcats locker room after their victory over University of North Carolina. Darius Miller, a Kentucky guard tweeted the above photo and even with the hoodie and shades, it’s apparent that it’s Jay in the photo.

Footage of the game also shows HOV greeting the players coming off the court after the game.

Two of the team’s players Terrence Jones and Brandon Knight are potential picks in the NBA draft.

NBA rules prohibit team personnel from having contact with players who are not yet draft eligible, and spokesman Tim Frank told the Associated Press the league is looking into it.

I think that Jay just got caught up in the moment from his team winning, and he didn’t plot or aspire to recruit any players for the NBA draft.

However, only time will tell. What do y’all think about this situation? Was Jay-Z trying to recruit for the Nets or just congratulating the team?