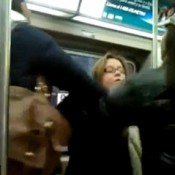 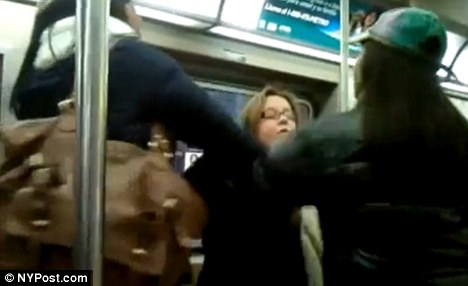 A recent assault between a group on New York City women went viral.

The New York Subway spaghetti fight video shows a young African-American woman who is eating spaghetti or some other noodle dish. An older Caucasian woman nearby expresses her displeasure by asking what kind of “animal” eats on the subway?

Probably not a good way to handle the situation. The woman eating the spaghetti and her friend get in the older woman’s face. The older woman, in turn, refuses to back down. It eventually comes to blows as the two women starting throwing punches at the older woman. Fortunately, one Good Samaritan tries to break up the NYC Spaghetti fight.

Now what exactly does this video say about ALL of the women involved? This is just absolutely ABSURD!

When did it become against the law to enjoy your food on a NYC subway car? The woman that verbally assaulted the young girls should have kept her nose in her OWN business. I’m thinking perhaps she may have been a little angry from the intoxicating aromas of the plates….or disgusted…depending on the meal.

Now this in NO way excuses the young girls behavior because it was UNACCEPTABLE to react in violence but….how would you react to being called an ANIMAL for enjoying your dinner?

I say the older woman should have put her headphones in and looked straight…like the majority of other people who ride the trains.