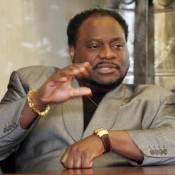 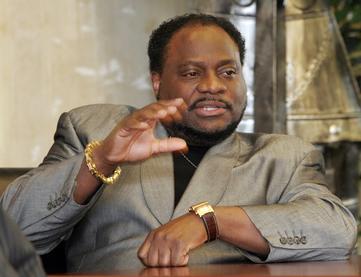 Looks like our favorite pastor is back in the pulpit!

Bishop Eddie Long left his home in Lithonia early Friday morning to conduct services at New Birth, which began at 7:30.

Long spoke on the importance of prayer and emphasized that the Christian message is aimed at sinners.

“There’s always somebody going to be yakking at you … you don’t have to answer to anybody but God,” Long said.

The resurrection “was not for perfect folk … but for the least, those who thought they failed,” Long said.

Concluding, Long said, “This ain’t going to be no bad Friday for me, it’s going to be a Good Friday.”

Channel 2 Action News reported Thursday that mediation efforts to reach an agreement may be in the final stages.

Last year all parties agreed to mediation. An agreement would avoid a lengthy and costly trial. If  an agreement isn’t reached, the case could go to trial this summer.

“We don’t have anything to comment about the status of the cases,” Art Franklin, a spokesman for Long, said Thursday. The attorney who represents the young men could not be reached for comment.

Channel 2  reported that marathon mediation sessions were suggested because some involved in the case didn’t want it go past Easter. Channel 2 also reported there was apparently one major obstacle preventing a resolution, but that appears to have been settled and the two sides are working on resolving the remaining issues.

The sides met in February for mediation talks but an agreement was not reached.

Thomas Arthur, a professor at Emory University’s School of  Law, said he wasn’t shocked that talks had gone “into the wee hours of the night. It’s like any other negotiations,” he said.

He speculated there could have been some “reality testing” by the judge or someone else involved “to get the parties to face facts.”

I’m not sure what the Bishop means by face facts…but I’m sure there are a few that he could face as well.

Do you think that Bishop Eddie Long will be able to reach an agreement in his mediation talks?