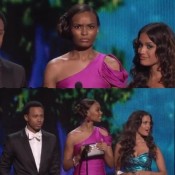 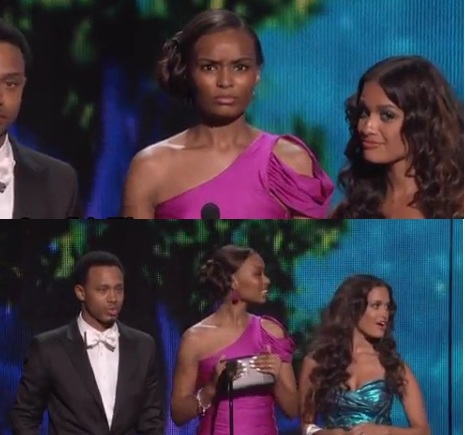 It’s not often that award shows end without some type of celebrity blunder and this year was no different. Tiffany Green, the winner of BET’s Ultimate Fan Contest presented an award with ‘106 and Park” hosts Terrance and Rocsi and got the biggest surprise of the night.

She first announced (reading from an EVO) that the winner was “Chris Brown, Look At Me Now” and then flipped the script (literally) and said, “I”m sorry, It’s Rihanna – What’s My Name.”

Tiffany immediately vented in the place most go when they’re feeling opinionated -Twitter:

Bawling backstage. They totally f*cked me up.

So BET did that on purpose. Oh. I feel better.

Look b*tches….Im not SLOW. lol They did the sh*t on PURPOSE. F*cked up right? *shrug* smh

I’m not sure why she decided to blame the network for conspiracy, versus admitting that it was an honest mistake.

That BET Awards Viewer’s Choice mix-up was due to human error. And I was the human that made that error. I apologize to ALL affected.

Kevin Hart, the host of this year’s award ceremony tried to fix the mistake by bringing Chris Brown back onstage to retrieve his award before the show ended.

I think her five minutes of fame are over.

Do you think BET planned the blunder or was this just an honest mistake?