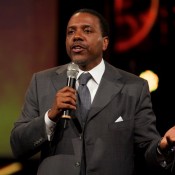 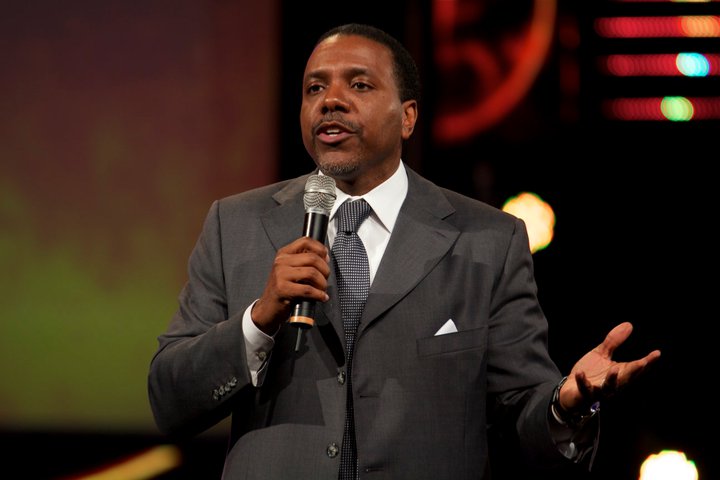 Creflo Dollar, who is the pastor of the World Changers Church in Atlanta came to the defense of Bishop Eddie Long during a recent sermon.

Long recently settled out of court, after he was accused of improper sexual conduct with four young men from his church.

Dollar wanted his congregation to know that they shouldn’t have left their preacher,

“I can’t believe that people would LEAVE THEIR PREACHER JUST BECAUSE HE HAD A WRECK.… instead of praying for him.”

It also seems as if the seats at New Birth Missionary Baptist Church are dwindling, and it’s getting a little tighter in other churches across Atlanta.

“And then the gossip that’s in the body of Christ over the preacher that had a wreck? He had a WRECK…. here’s the good news.. HE HAD INSURANCE!!

And if you from that church that you know what I’m talkin’ bout and you tryin’ to join here, I don’t want you here! That is my friend! That is my brother in The Lord!

And if you came from there, you get on BACK OVER THERE and do what you’re supposed to be doing. Because he had insurance, and Jesus paid the premium.”

Dollar was PREACHING during this sermon, but I’m still not seeing the light. Does he honestly think that people who leave New Birth are wrong? Yes, people make mistakes but usually when you want forgiveness you issue an apology. Where is Long’s address to his congregation admitting his faults? The fact that he hasn’t so much as acknowledged his wrong doing is my issue...this is something that you can’t just sweep under the rug.

Would an apology from Bishop Eddie Long be enough?