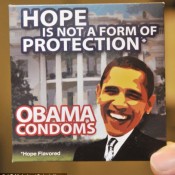 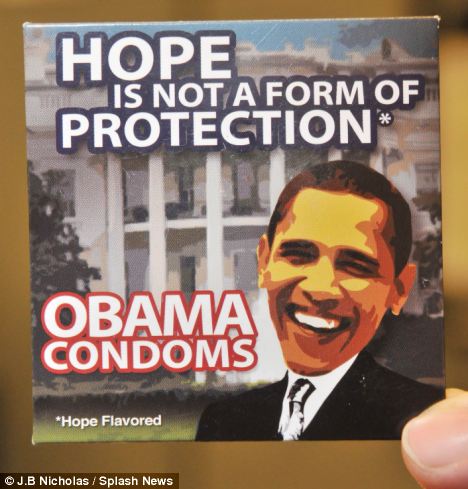 Just when I thought the President’s newly announced t-shirt line was enough….

A New York street vendor has been arrested for selling condoms with President Obama and Sarah Palin’s faces on the wrappers.

Jose Andujar, 43, was arrested in Times Square on Friday for selling the condoms that are printed with Mr. Obama’s face and the phrase “Hope is not a form of protection”.

The arrest came despite a State Supreme Court ruling that his condoms are protected by the Constitution’s guarantee of free speech.

The judge said that the condom wrappers should be treated like books, which do not require a vending license.

It is the third time that Mr. Andujar has been arrested for unlicensed peddling in a year.

The city said that it will continue to arrest the trader, pending the outcome of an appeal.

The Sarah Palin condoms have a photo of the potential Republican presidential candidate with the words, “When abortion is not an option”.

Mr. Andujar is a regular face in the center of the city where his sales pitch lines include:

The site claims to have sold nearly 500,000 condoms featuring the President’s face since it was set up in 2008.

Seems like everyone is trying to capitalize off of the Commander-in-Chief these days…(Obama Gas, Obama Chicken, Obama Weave…etc).

What’s the craziest depiction you’ve seen of our President?