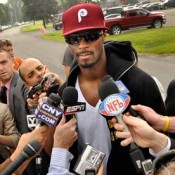 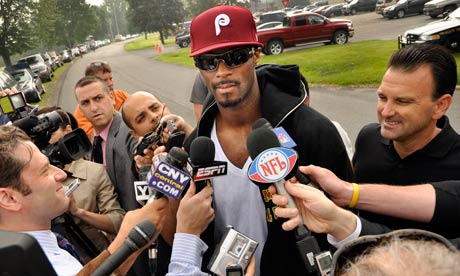 The former New York Giants wide receiver Plaxico Burress has been released from prison after serving 20 months on gun charges and the 2008 Super Bowl hero hopes to return to play in the NFL.

Burress, 33, left Oneida Correctional Facility in upstate New York three months early for good behavior after pleading guilty to gun possession charges from a Manhattan nightclub incident in which he accidentally shot himself in the thigh.

Because he was a high-profile inmate, Burress was placed in a protective custody unit at the prison, which has 930 inmates, 20 in protective custody. While in prison, he completed an aggression management program and worked as a lawn and grounds laborer, according the state’s Department of Correctional Services.

Burress will be on parole for two years. He has to get and keep a job, undergo substance abuse testing, obey any curfew established by his Florida parole officer, support his family and undergo any anger counseling or other conditions required by his parole officer.

“I just want to thank God for bringing me through one of the most trying times in my life,” Burress said as he left the prison. “It’s a beautiful day, it’s a beautiful day to be reunited with my family and go home for some quality time with them.”

Burress caught the game-winning pass in the last minute of New York’s 17-14 upset of the unbeaten New England Patriots in the Super Bowl. But he was was released by the Giants following the November 2008 shooting incident and is now an NFL free agent.

The tall receiver, who began his NFL career with the Pittsburgh Steelers, must wait for the labor dispute between NFL owners and players to be resolved before he can market his talents, which his agent has made plain he intends to do.

Let’s hope that he’s ready to make some positive changes as a law-abiding citizen!