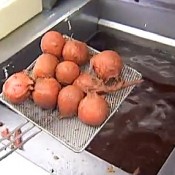 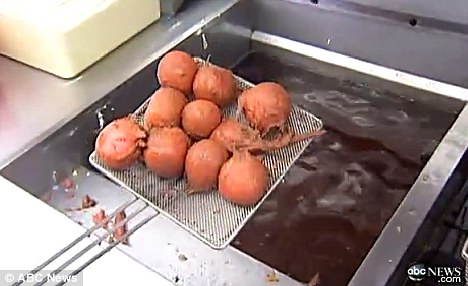 New Snack Is Sweeping Festivals Across The Nation

Most of us grew up drinking Kool-Aid and it was a staple in many American homes. Although the sugary laced drink is not the healthiest choice in a beverage, it seems like a new snack containing the mixture may have the drink beat!

Fried Kool-Aid has hit the festival scene in a big way this summer.

The Kool-Aid balls were created by chef Charlie Boghosian , who quickly found his diabetes and obesity bombs are a massive hit.

He simply drops spoonfuls of the batter, made up of the famous drink mix, flour and water, into the burning fat, lets it sizzle for a minute and bang, the latest contribution to the culinary arts is born.

The ‘treat’ has been selling like crazy at county fairs throughout the South and after making its first appearance at the San Diego County Fair the snack went viral.

On Sunday, Father’s Day, it was trending massively on Twitter.

At the San Diego fair, he was selling up to 600 orders a day from a mobile vendor, with five balls in an order.

Mr. Boghosian describes the taste as being ‘like donut holes.’

So far he has concentrated on cherry flavor, but as millions of children know, there are many other flavors to explore in the future.

Be warned – they may be coming to a fair near you.

I’m currently on a weight-loss journey so I won’t be trying this treat. I’m also wondering what this guy will come up with next…?

Will you give Kool-Aid balls a chance next time you’re at a fair?