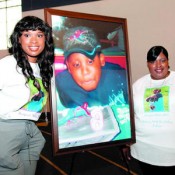 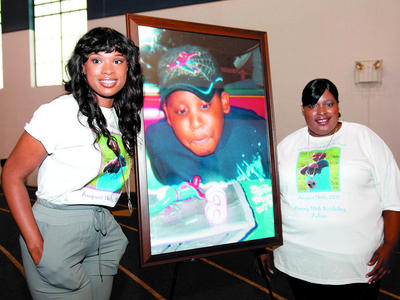 Jennifer Hudson gave back in a big way in her hometown of Chicago.

The singer and Oscar winner honored her slain nephew by hosting the first annual Hatch Day on behalf of the Julian D. King Gift Foundation at the De La Salle Institute in Chicago. Julian was killed in 2008 by William Balfour, the estranged husband of Jennifer’s sister Julia Husdon. Balfour also killed Jennifer’s mother and brother as well.

The Hatch Day event was held on what would have been Julian’s 10th birthday. Over 2,000 children we given school supplies and were able to customize their own backpacks. Jennifer said that being able to give back was an opportunity she had to take:

“It feels good to give back to children, as he was a child and also to help inspire your kids — that’s one of the things that helped me growing up, to know that, ‘Wow, if this is in my presence, then I can achieve and I can do it, too.’”

Jennifer’s presence will be felt by many more Chicago children as they gear up for back to school. The singer will be featured on robocalls to 285,000 Chicago public school students reminding them that their first day of school is September 6th.

Kudos to Jennifer for giving back!