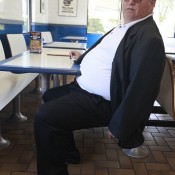 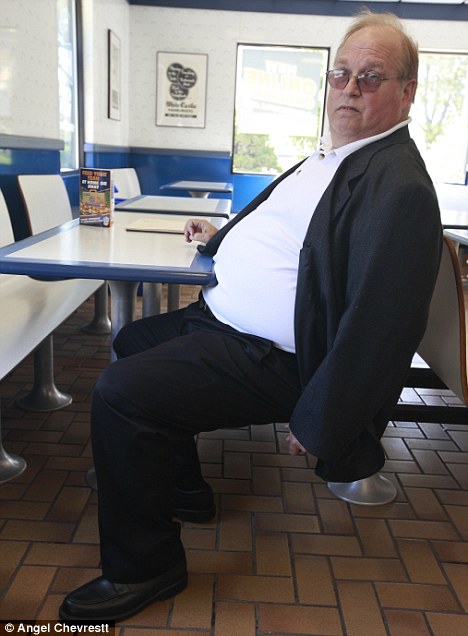 290lbs Martin Kessman, 64, is suing White Castle over claims he could not fit in booths at the chain’s restaurant in Nanuet, New York.

He claims White Castle offered him free hamburgers in responses to three separate complaints – but he still had to pay extra for cheese.

I’m not sure Mr. Kessman needs any more hamburgers.

‘They’re stationary booths,’ he told the New York Post. ‘I’m not humongous (but) I’m a big guy. I could not wedge myself in.’

The stockbroker also claims he hurt his knee, after knocking it against a metal support bar on the table.

The hamburger chain has offered to expand the seats and sent him design specifications, so I’m not sure what he’s still upset about.

Kessman says he does not have trouble fitting into restaurant booths at other restaurants or even seats on the airplane.

I’m wondering whose responsibility it is to make room for such special requirements? Imagine if White Castle ordered him to lose weight to fit inside the booths……

He must really love those square hamburgers.

Should restaurants have to expand seats to accommodate plus-size customers?