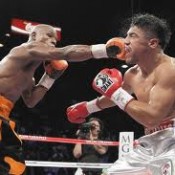 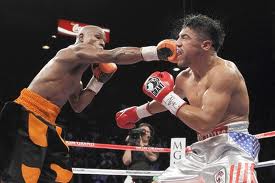 Not everyone was happy about the victory.

An illegal headbutt to Mayweather by Oritz caused a momentary pause in the action in the fourth. Ortiz approached Mayweather, gloves lowered, to apologize for the headbutt — despite the fact that it certainly appeared to be intentional. With Ortiz’s guard down immediately after he proffered his apology, Mayweather struck with a quick left. Ortiz, already backing up when that blow landed, was stunned. Mayweather then wound up for, and subsequently landed, a devastating right that sent Ortiz to the canvas.

Questioning by 80-year-old boxing analyst Larry Merchant over the victory, left Mayweather feeling like he had to flex a little.

Merchant hit back with,