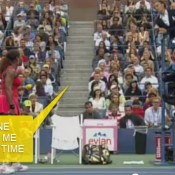 “Really, don’t even look at me,” Serena Tells Umpire

The U.S. Opens finals got a little lively yesterday when Serena Williams gave the Umpire a piece of her mind.

Serena was in a match against Australian tennis pro Samantha Stosur and in the middle of a good hit she yelled out before the final point was called – which is illegal in tennis play.

The chair umpire then awarded the point to Serena’s opponent and told her she may have distracted her rival by her outburst.

Serena lost it and said:

“Are you the one that screwed me over last time here? Yeah, you are. That’s totally not cool, I truly despise you.”

She wasn’t finished with the umpire yet and went on to say:

” If you ever see me walking down the hall, look the other way, because you’re out of control! You’re totally out of control, you’re a hater, and you’re unattractive inside. Who would do such a thing? And I never complain. Wow… What a loser! You get a code violation because I express my end? We’re in America last I checked.

Can I get a water or am I gonna get violated for a water? Really, don’t even look at me! I promise you, don’t look at me, ’cause I am not the one. Don’t look my way.“

http://www.youtube.com/watch?feature=player_embedded&v=Ap32zLk4T0A#t=0s
In the ultimate act of defiance after losing to Stosur – Serena refused to do the customary handshake with the umpire.
Don’t. Mess. With. Her.

Should Serena have been penalized?