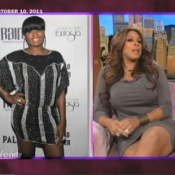 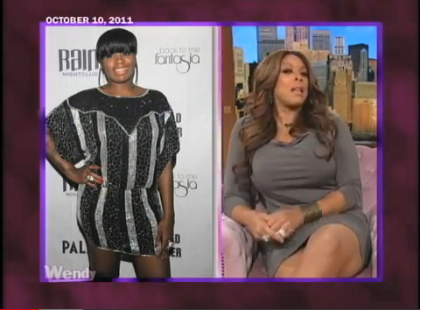 Fantasia is sick of the rumors.

The American Idol winner is now on bed rest after complications from her pregnancy with rumored baby father Antwaun Cook, so she has a lot of time to watch TV.

Imagine her surprise when she heard Wendy Williams saying that she might get kicked out of the “Mahalia” biopic.

So what’s a girl to do? Tasia called into “The Wendy Williams Show” to clear up a few things.

She explained: “There were no contracts signed and there was no set date so when this came out I jumped up in my bed and said, ‘I hope this didn’t come from my producer,’ because again there’s no black and white, there’s nothing in black and white. We waited on them, they said the money didn’t come through. So I was a little pissed off because I wanted to make the family proud, and most of all I wanted to make Mahalia Jackson proud.”

Her production company also decided to clear the air.

Double Dutch Productions, LLC. (DDP) extends apologies to Fantasia Barrino for the inaccurate, non-factual and disparaging statements of Ms. Barrino’s reputation, character and image, that was stated in the October 7, 2011 article of the NY Post’s Page Six column. The comments made in the article by financing broker Adrian Taylor, were not authorized, approved or condoned by the producers of DDP. The information and comments expressed within this article regarding the project were solely those of Adrian Taylor. Taylor is not an employee of this production company nor an active participant of any facet in the producing of this film. Taylor has been reprimanded on two previous occasions for speaking to the press about this project.  He was told that he was not a spokesperson nor a producer of the film, nor involved in the production or publicity of the film. Mr. Taylor’s credit of Executive  Producer will be valid only pending a final contract for financing. DDP and its producers disavow any statements or comments attributed to this article that were inappropriately made. Mr. Taylor does not speak for this company or the production of this film.

The Mahalia Jackson family has not made any negative comments non-what-so ever about Ms. Barrino and her participation in this film project.

We at DDP want to assure Ms. Barrino that in no way are we responsible for the information that was included in the article. ANY FUTURE COMMENTS FROM OUTSIDE PARTIES REGARDING THIS FILM THAT ARE NOT DIRECTLY PROVIDED BY DDP OR ITS PUBLICIST WILL BE DEEMED AS VOID, BOGUS AND INACCURATE.

Sounds like there’s STILL a whole lot of issues that need to be addressed with this film.

In the meantime…I’ll be waiting on Fantasia’s visit with Wendy when she discusses her relationship with Cook.

What side do you believe?