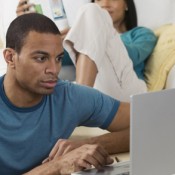 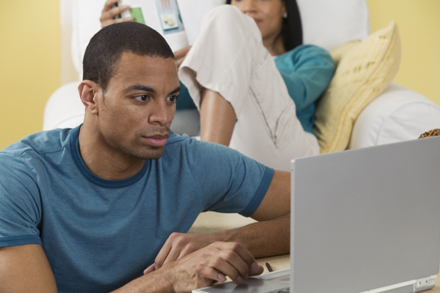 Let’s face it, sometimes we’re just wrong about people. The great guy that you met at the after-work mixer two months ago seemed fine on the surface, until you realized he had a problem…with his ex.

He was constantly talking really negatively or positively about her. He was always available for her, attending her nephew’s Little League games and still called her mama about his promotion.

I thought they broke up? Ladies, if the above scenario sounds like the man in your life. Please see below.

8 Signs He’s Still Into Her

1. He talks about her constantly

If he can’t keep her name out of his mouth. That’s a big red flag. Even if he’s always bashing her, it’s not a good sign. Being over someone means letting them go…

Why would he want you to be like her if the relationship didn’t work out and it’s over? Enough said.

Is there a reason he’s volunteering at her little cousin’s school? He shouldn’t feel an obligation to keep in contact with an exes family…unless he wants to remain on their good side. But why?

4. He still has relationship keepsakes

Why is he holding on to every item that reminds him of her? That’s just not healthy and shows that he hasn’t reached closure in the relationship.

5. He’s still connected to her on social media accounts.

6. He trashes her when someone mentions her name.

Why is he overly professing his hate for his ex? It really shouldn’t matter if he’s over his feelings.

Is he still running to fix her flat tire or take a look at her kitchen sink? You need to be asking yourself why he’s so willing to be her superman.

8. He started dealing with you before the relationship was over.

Are you a rebound chick? Did he jump into things with you before his old relationship completely ended? He may not have had adequate time to heal.

If you answered yes to three or more of these signs – I suggest you cut him off and find a new guy who isn’t carrying around this type of baggage.

Feel free to share your own experiences about dating someone who wasn’t over their ex.