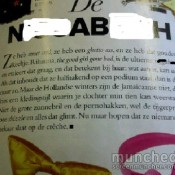 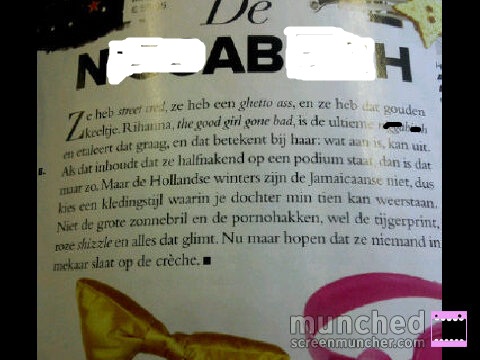 A quick translation of the article reads:

“She has street cred, she has a ghetto ass and she has a golden throat. Rihanna, the good girl gone bad, is the ultimate niggabitch and displays that gladly, and for her that means: what’s on can come off. If that means she’ll be on stage half naked, then so be it. But Dutch winters aren’t like Jamaican ones, so pick a clothing style in which your daughter can resist minus ten. No to the big sunglasses and the pornheels, and yes to the tiger print, pink shizzle and everything that glitters. Now let’s hope she won’t beat anybody up at daycare.”

Of course after the backlash somebody at the magazine decided to inform the world that it was a joke.

First: thanks for all your responses. We are of course very fed up over this and especially very
shocked. However I’m glad that we’re engaging in a dialogue on this page — not everybody does
that. Thanks for this. Other than that I can be brief about this: this should have never happened.
Period. While the author meant no harm — the title of the article was intended as a joke — it was a bad joke, to say the least. And that slipped through my, the editor-in-chief’s, fingers. Stupid, painful and sucks for all concerned. The author has been addressed on it, and now I can only ensure that these terms will no longer end up in the magazine. Furthermore I hope that you all believe there was absolutely no racist motive behind the choice of words. It was stupid, it was naive to think that this was an acceptable form of slang — you hear it all the time on tv and radio, then your idea of what is normal apparently shifts — but it was especially misguided: there was no malice behind it. We make our magazine with love, energy and enthusiasm, and it can sometimes happen that someone is out of line. And then you can only do one thing: apologize. And hope that others wish to accept it.

From the bottom of my heart I say it again: we never intended to offend anyone. And I mean that. 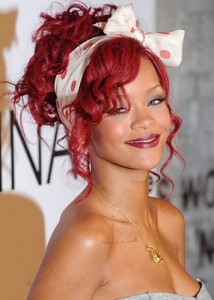 Save it. I’m wondering why people don’t have a cultural sensitivity checklist that they use before publishing this crap? It would make it a lot easier than back-tracking with their half-done apologies.

Rihanna being the loosely lipped star that she is, fired back on Twitter saying:

“@evajackie I hope u can read English, because your magazine is a poor representation of the evolution of human rights! I find you disrespectful, and rather desperate!! You ran out of legit, civilized information to print! There are 1000′s of Dutch girls who would love to be recognized for their contributions to your country, you could have given them an article. Instead, u paid to print one degrading an entire race! That’s your contribution to this world! To encourage segregation, to mislead the future leaders to act in the past!

“You put two words together, with the intent of abasement, that made no sense…”N—A B—H”?!….Well with all respect, on behalf of my race, here are my two words for you…F–K YOU!!!”

Sound off. What are your thoughts on the article?

The EIC resigned yesterday after the backlash from the article. She posted a message on Facebook detailing her reasons for leaving.

I realize that my first reaction on Twitter, where I indicated that it was a joke, was an incomplete description of what I, and also the author of the article referred. The term ‘n—a b—h’ h” has come over from America and we have only this to describe this particular style of clothes that we can try to interpret. Due to the enormous pressure from social media, I promised to do better regarding the language in future issues of Jackie and I have offered to rectify the situation.

I have now come to the conclusion that rectification is not the right solution. I regret that I have taken too quickly positions on an item in Jackie – which incidentally had no underlying racial motive. In the course of events I went with, the publisher came to the conclusion that, now that my credibility is affected, it’s better for all parties if I immediately lay down my duties as editor. After my eight years giving my heart and soul for Jackie, I realize that these errors – although not malicious intent – are a reason for leaving. “