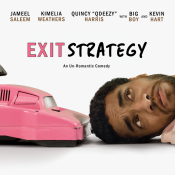 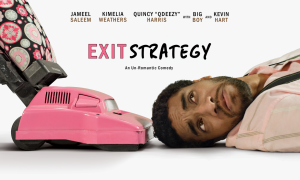 A new black film in the un-romantic comedy genre is set to hit theaters in February.

James (JAMEEL SALEEM) gets evicted from his apartment and moves in with his girlfriend of 3 months Kim (KIMELIA WEATHERS) and quickly discovers she’s everything he never wanted in a woman.  He enlists best friends Carville (QUINCY “QDEEZY” HARRIS) and Leona (NOELLE BALFOUR), plus strangers like BIG BOY and KEVIN HART to find a relationship exit strategy; but for Kim, breaking up just isn’t an option.

The film was shot on the HD video-enabled Canon EOS 5D Mark II DSLR in Los Angeles and North Hollywood, with post-production completed in Los Angeles.

After watching the trailers the movie looks like it’s going to be funny. Anything with Kevin Hart is bound to have a few laughs, it’s nice to see some new black actors getting some shine as well.

Did you enjoy the trailer? Will you be going to see “Exit Strategy?”