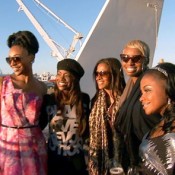 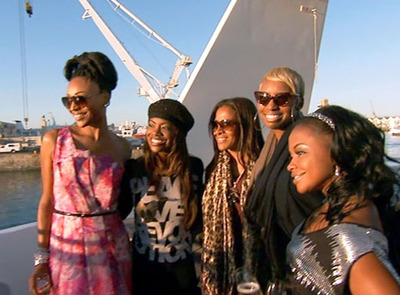 The ladies in South Africa.

After watching last week’s teaser I knew that this episode would bring the drama, and I wasn’t disappointed.

The ladies of The Real Housewives of Atlanta; Phaedra Parks, Nene Leakes, Cynthia Bailey, Sheree Whitfield, Kandi Buress and special uninvited guest Marlo Hampton arrived in South Africa with loads of Louis Vuitton luggage. Nene reminds us, again, that she’s VERY rich with her 15 pieces straight off the showroom floor. The ladies almost didn’t make it out of the airport as they struggled with their luggage but after some investigating they found an elevator and were whisked off to the luxury penthouse suite that Phaedra booked. My top five moments:

Marlo annoyed the majority of the ladies when she kept talking about etiquette. She goes on and on about how to pass the salt, proper ways to sit and the like. Sharing bathrooms is also out of line for Marlo because that’s “yucky.” Phaedra comments, “Marlo should be grateful she has a place to lay her head. Maybe she could plan her own trip so she can have exactly what she wants.” BLOOP.

After everyone wonders around their luxurious penthouse suite. They’re up in arms about how to split up the rooms. Sheree jokes that her Nene and Phaedra should share one apartment and everyone gets silent until she yells, “Just kidding.” She even got a laugh out of Nene for that one.

Phaedra being the great southern belle that she is made sure to get everyone a gift (engraved mirrors) for attending the trip. All was well until Marlo noticed that she had not received a present…..I guess she forgot that she wasn’t invited along in the first place. Ever the peacemaker; Phaedra offered to send her a mirror upon their return to Atlanta. It wouldn’t have been me!

In the jaw-dropping last moments of this episode we saw all of Marlo’s carefully poised manners go out the window. Cynthia walked into the room with Sheree, Phaedra and Kandi and had a heart-to-heart with the ladies, when Sheree invited her to a party that she’d failed to inform Marlo and Nene about. Being an instigator Cynthia promptly went back to inform Nene and Marlo about their non-invitation and that’s when Marlo lost it.

In a shouting match fit for a pair of two-year-olds, Marlo and Sheree shared insults about finances. The main jabs included that Marlo supposedly sleeps with an 80-year-old white man and hat Sheree is broke and fronting.

Nene was surprisingly a peace-maker during this episode and tried to bring the tension down…to no avail.

The episode ends with Marlo and Sheree making funny faces and strange noises…perhaps in preparation for next week’s safari.

What was your favorite moment from this episode?