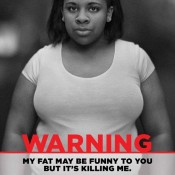 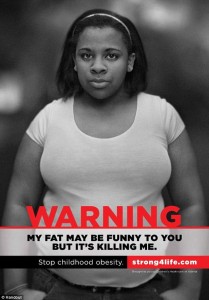 Georgia has the second highest rate of childhood obesity in America. One group is taking drastic measures to educate parents about the dangerous epidemic.

As part of a standing effort to get kids in Georgia to get healthy, Children’s Healthcare of Atlanta has launched a controversial ad campaign aimed to shock parents into action.

The print ads come in tandem with television commercials that the group launched earlier this year that show the same children.

An earlier portion of the campaign included billboards with the children and taglines shaming their looks. The National Association to Advance Fat Acceptance called for the billboards to be taken down, but did not win.

Children’s Healthcare of Atlanta argues that the images are not the most shocking part, but the lack of understanding is instead.

In their research done prior to releasing the campaign, 75 per cent of parents who have obese or overweight children did not think their kids had a weight problem. Beyond that, 50 per cent of all participants didn’t think that child obesity was a problem in the state.

Check out some of the television ads below:

This campaign is reminding of the drastic measures we used to get children to “Just Say No.” Sometimes we need to take action and stop acting like certain issues can get shoved under the rug. This campaign is bringing to light a very important issue and maybe this is just what we need to get our children healthy.

Do you think this campaign is a good move or is it shaming children and parents?