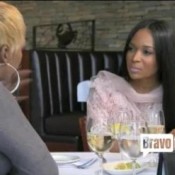 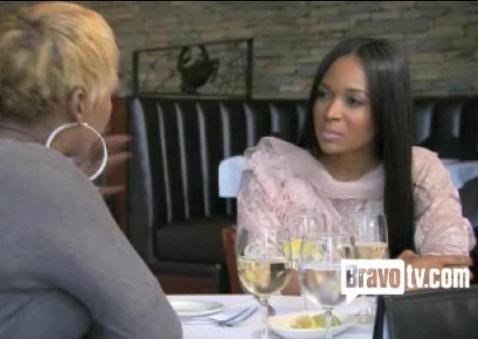 Last night’s episode of “The Real Housewives of Atlanta,” was not filled with the usual cattiness that makes the show entertaining. It was more so about partnerships.

NeNe fell in love with Marlo Hampton after the last episode when she kept saying, “big poppa,” much to the chagrin of Kim who was there with her baby daddy Kroy.

The two women decided to try out a friendship and meet for drinks at Goldfish.

NeNe made it very clear to Marlo that despite what the blogs posted – her current boyfriend, Charles Grant, did NOT see her “hello kitty.”

Marlo then revealed that she had been arrested 7 times and NeNe couldn’t keep a straight face.

Marlo later invited NeNe to a charity function where she proved that she is indeed a socialite. NeNe hilariously tried to keep up with the conversation of of the ladies, but later confessed she didn’t have a clue what it meant to “go green.”

“I don’t know about going green…unless it’s green going to the bank.”  Nene

Sheree visits Kim to check out her enormous new digs and to try to get the new mother in shape. Everybody knows Kim would rather have a fast fix then to work out….like us regular people. I’m sure we’ll see Kim sporting a fab body as soon as she ditches the black.

Phaedra’s obsession with dead bodies continues. She visits Willie Watkins Funeral Home with her husband Apollo. Phaedra is ecstatic about the possibilities:

Apollo however isn’t too keen on the venture, after Mr. Watkins shows him the embalming fluid and talks about opening up the bodies. Phaedra pleads for her husband’s support and he finally gives in – after adamantly stating he wouldn’t be touching any dead bodies.

I don’t even know where to start with this pair. Cynthia and Peter, unfortunately, have been fighting for their marriage from the beginning. Cynthia is fearful for her marriage and wants counseling, after Peter rudely left the launch of her new business venture without telling her.

The two have communication issues which is a problem in a lot of relationships when people have different styles.  Cynthia told him, “We don’t talk to each other.” “We talk at each other.”

They visit Pastor Gregory Pollard who tries to get them to explain why they love each other.

That didn’t go over too well and after the session Cynthia confesses that sometimes she doesn’t feel like she likes or even loves Peter anymore.

I’m keeping my eye on these two and I hope that they’ll be able to work through their issues.

What was your favorite moment from episode 8?