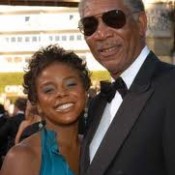 The new phenomena of not understanding the boundaries of relationships has entered into the African-American community once again.  Over the past several weeks, we have been going back-and-forth with the discussion of weather or not Bobbi Kristina is engaged to or dating her God Brother-Nick Gordon. What is very interesting is that, last year, I wrote a post on Did Morgan Freeman Really Have an Affair With His Step Granddaughter (click on the link to see this “must see” post) and it still gets hits daily on my blog-WOW. I just don’t know what to think about this phenomena?

Well, the National Enquirer reported, in January of this year,that the Oscar Winner-Morgan Freeman has been romantically involved with his 27 year-old-step-adopted-daughter, E’Dena Hines and now there is a little more to the relationship. Now this is how this geneology, if true, would go;

Now get this one;

This is very confusing but the truth. I think after taking inventory, either one or two things must happen.  If you know that you have the propensity for illicit love affairs, don’t adopt or claim non-blood relative.  It is true that there is no blood line, but their is just something ethically wrong with both of the relationships outlined above.

It is alleged that Morgan Freeman and his second wife raised this young 27 year old lady. (E’Dena) If true, I am wondering what was actually happening during the critical years in that household.  Who was paying attention. The National Enquirer, who we love to hate, reported that “Myrna (Morgan’s second wife) said that E’Dena told her that when she was a teenager,she and Morgan went to dinner at a friend’s house one evening. The both had been drinking, and when they returned home, Morgan attempted to have sex with her. They stopped short of having intercourse.” This information was supposedly reported by a family insider. Now this would be harder to believe if Morgan and she had not been seen out at several Hollywood events.  They were actually seen at the LA premiere of “The Dark Knight” last June.

It is scary but they actually may get married, yep. How can we reconcile this issue? I would like to ask the readers a couple of questions;

What is interesting is that some people are calling E’Dena his step-granddaughter.  This is actually correct. She is the daughter of his adopted daughter/stepdaughter. He adopted his step-daughter so he could be considered legally her father. So we can dress it up and say that E’Dena is his step-granddaughter (this is technically true-but confusing also).  If that makes us feel good, but the truth is that it is just too close for comfort. In essence this is his adopted granddaughter in some of our sights. That just doesn’t look too good, Mr.Clark!

The morale of this story is that they aren’t any morals. Now if you are currently having relationship difficulties, before you get into any of the above troubles check out my new ebook, “Am I in a Bad Relationship.” Just click on this link.

Please pick-up the e-book and thanks for stopping by the blog today,

By the way one of my angry readers commented on the earlier post, “Morgan Freeman has a right to happiness-too!” I responded, “Yeah Right!”