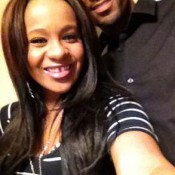 This issue has yet to be placed at rest.  However, I don’t believe that there is “any engagement.” That is just me! There seems to be a lot of  ongoing controversy about the possiblity of this relationship-but so what. I think that we all would agree they appear somewhat closer these days; the question is just how close?  As a psychiatrist, I have tried to put a couple of things into a different perspective with this issue.

I was sitting back trying to get an understanding of just what is the problem people are having with this relationship.  I am really not able to coming to any clear conclusions accept maybe people are thinking that somehow this relationship would be inappropriate if true. Love has many ways of manifesting itself.  I am very sure that these two have been close for several years. Did they or do they have current feelings? We really can’t be too sure however, does love usually go to the highest bidder.
I would imagine that Bobbi K. is very lonely right now without her mother. Yes, we have seen them holding hands and walking in and out of stores but so what. The issue is, “should Bobbi K, be lonely and alone or should she reach out to close friends that have been there for her in the past?” I am sure that this is not the first time that these two have been intimately involved and who are we to judge where their future will go. You don’t want to be alone and I am sure that this young lady does not want that feeling either.
Now the flip argument needs to also be addressed. Could Nick Gordon be taking advantage of Bobbi Kristina at this vulnerable time?  This is certainly very possible.  The Bible states, “The love of money is the root of ALL evil.” Nick ain’t no dummy and he knows that this young lady will be financially set for the rest of her life, if she handles her finances correctly. Some people suggest that he should back-off during this initial grief period because, as we know, people tend to be very vulnerable during a period of initial grieving. However, they both are young an most probably are not processing on a level that makes very much sense.
Rumors have it that Whitney’s family, specifically her mother, have expressed their discontent and want Nick kicked out of Whitney’s Atlanta home. I am just NOT so sure that this will happen. I understand the family’s need to protect this young lady but usually when it comes to affairs of the heart-it can really backfire. Bobbi Kristina can turn against them all. It is further rumored that Bobby Brown , her father, has a problem with this new found relationship.  Huh, I am just NOT sure what influence he would have, if any, in Bobbi Kristina changing her mind.
I really believe that we will have to wait this one out. Time will tell the true essence of their relationship. If it is for real and they do decide to move forward, I am hoping that Bobbi K, gets a prenuptial agreement signed. Nowadays it is just the thing to do. On the other hand, they could possibly live happily ever after.
In closing what are your feeling concerning this issue.

I know many of you out there might just be going through your own relationship issues. If you need help sorting out a few of your issues, pick-up my e-book, “Am I In a Bad Relationship?”

My book can be found on the site and at http://amzn.to/AcFViO