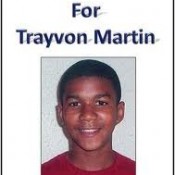 Today is a very good day. The habitual caller of 911 will be investigated.  I would like to allow you to hear the “last cries” of Trayvon. This experience sends chills throughout my body.  Please prepare yourself before looking/listening to the video.

As many of you may recall George Zimmerman, 28 of Sanford , FL a self-proclaimed vigilante murdered Trayvon last February.  The entire country is now involved and justice will be served. Mr.Zimmerman totally disregarded the 911 advice, followed this young man, and then brutally murdered him for no reason.  He claims that it was secondary to self -defense.  However, this teenager had on his person, a bag of Skittles and an Arizona Tea.

Per the U.S. Justice Department, “The department will conduct a thorough and independent review of all of the evidence and take the appropriate action at the conclusion of the investigation.” (This statement was e-mailed on yesterday)

This type of social injustice just can no longer be tolerated. It is my understanding that Zimmerman was initially thought to be White, however, his parents have made it clear that he is a “White Latino.” What that means-I am not sure. However, the stakes are pretty high in this case. This was a son of us all and we will NOT just stand by and allow such foolishness to take place.

Al Sharpton will be in Sanford on today to meet with several city leaders.  The exchange, from my understanding, will center around how the investigation will be taking place.  There has been a show of force and many residents across the country are joining forces to rally against what has  happened. The evidence points to “pure ignorance and racism”  The 911 tapes point to “A vigilante without a cause.”

Florida law that states, ” an individual has the right to stand his or her ground and meet with force, including deadly force, if he feels threatened” is asinine. My question to Mr. Zimmerman-You got in your car and followed this young man down the street.  You then exited your car, tussled with Trayvon and then shot him in the chest. This is self-defense?   You don’t have to be a first year law student to call this one.

There is a message in all of this for our youth.  Although, we have Mr.Obama as President and have made a number of advances, as it relates to race relations in our country, we are still dealing with a number of ignorant racist who can be very dangerous.  Parents protect your children to the best of your ability.  I am not asking you to suffocate them in anyway, but I asking you to help mold their decision making process.

There are just some neighborhoods and counties that I don’t advise African-American youth to hang-out in today.  For example, even in “Chocolate Atlanta”-Cobb/Douglas and Forsyth County just aren’t good places for our youth to be. That is the whole truth. Some people may challenge me and say, “We can live anywhere.” Yes, you can but not without possible duress.  There are still a lot of stereotypes and bizzare ideas that some racist retain.  All I am saying is to be careful.

If you have a chance go to the forum, “Walking in Dark Places” and  leave your comment.