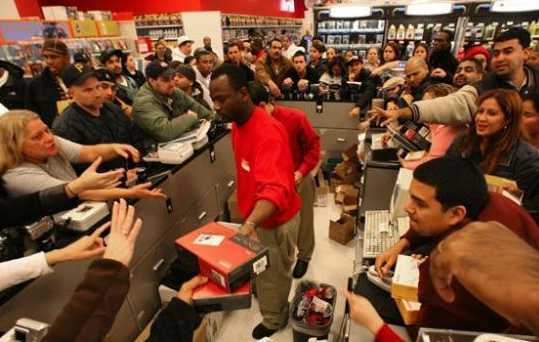 Most men don’t seem to be as enthused about this annual deal snatching day as women, but one male Wal-Mart shopper appeared to be quite tense and uptight as a few kids decided to play a prank on him while he tried to shop during this crazy time. The shopper even threatened the kid in this video by saying “I’ll kill you!” as he went about his night of bargain shopping.

“Black Friday” is considered to be a personal challenge to those that wait all year for outrageous sale prices on items such as electronics, home goods, and toys. Ever year, thousands of people wait in lines wrapped around buildings, stand against cold weather and even camp out just to be among the lucky consumers to score the big slashed down prices.

According to the Huffington Post, there are three main groups that participate in the annual Black Friday festivities.

1. Small packs of young women.These women in their teens and twenties are there for the experience, planning on hitting a few stores then “with a restaurant stop or some clubbing on the agenda.” (Clubbing on Black Friday? That’s new to us.)

2. Individual women on a mission. This woman, typically 25-55 years old, is “hard-core” about finding the best deals. These are the hunters who bravely venture out the Thursday night of Thanksgiving.

3. Big families on a tight budget. Lower-income families without the means for a babysitter will take the whole gang, strategically shopping the best deals and waiting for hours in long lines.