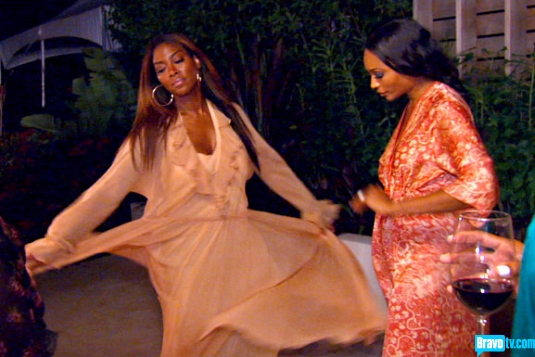 Well, if we didn’t learn anything else last night, we now know that Kenya is “Gone with the Wind fabulous “. No man, a mediocre career and clearly delusional. She sure showed them with that dainty dress twirl of hers.

For all those that missed the Atl drama last night, here’s a run-down of  what happened.

The ladies and their mates were on location in the Caribbean at the island of Anguilla. The oh so desperate Kenya continued to flirt with unavailable Apollo. A woman in a happy committed relationship wouldn’t be flaunting herself over a married man that isn’t hers (Kenya is unknowingly raising her own red flags with her lack of interest in her own “boyfriend” on the show). What woman in their right mind would ask a wife who she would give her husband to for a night? Silly girl.

Later in the show when the couples were discussing their bedroom activities, the world’s best couple Kenya and Walter looked seemingly uncomfortable during the chat.  Wonder why that is? But they weren’t fooling NeNe, she called them out on her suspicions and was doing a surprisingly good job of keeping the peace last night. Way to go NeNe!

A bit of good news featured on the show was Peter and Cynthia re-newing their vows. A little early for that if you ask me, but Mariah Carey and Nick Cannon do it every year so why not.

Porsha and Kenya got into it with the “go-to” insult of “Bi**h” by Kenya and a  “take your hood rat ass back to Detroit” from Porsha. I think it’s safe to say that they won’t be BFFs this season.

Tune in next week to see how more drama unfolds.