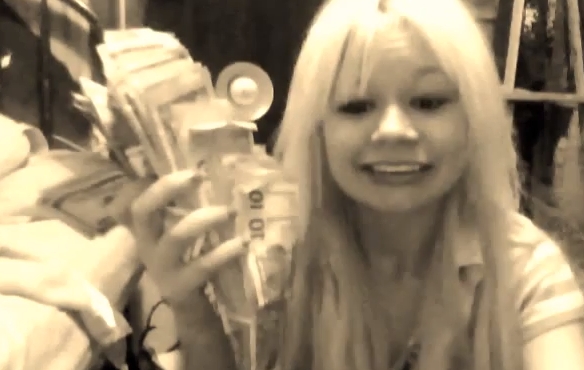 We’ll probably see this young lady on Tru Tv’s “World’s Dumbest” show during its next season. 19 year-old Hannah Sabata, successfully pulled off a bank robbery in Nebraska, getting away with thousands of dollars. After she returned home, she celebrated her new found money by allegedly posting a confessional YouTube video entitled “Chick Bank Robber”.

As reported by International Digital Times:

According to authorities, Hannah Sabata entered the Cornerstone Bank in Waco and handed the tellers a note that read, “You are being robbed! NO ALARMS OR LOCKS OR PHONES or INK BAGS! I have a loaded gun. You have 2 minutes.” In total, Sabata has stolen $6,256.

Since Sabata didn’t identify herself by name on the video,  authorities still have to prove that she is the one featured in the YouTube confession. However, they are not too concerned about that since witnesses and bank security footage helped them catch her before they even knew about her confession tape. Plus,  the all the tools she used for the robbery (that were seen in the video such as sunglasses and a pink backpack) were found in her home when police came to arrest her.

iDigitalTimes reported that Sabata also stole a Pontiac Grand Am to commit the crime and is now being held in a York County jail. All the money, minus $30 was recovered.

I think it’s safe to sum this story up with the “young and dumb” cliche.