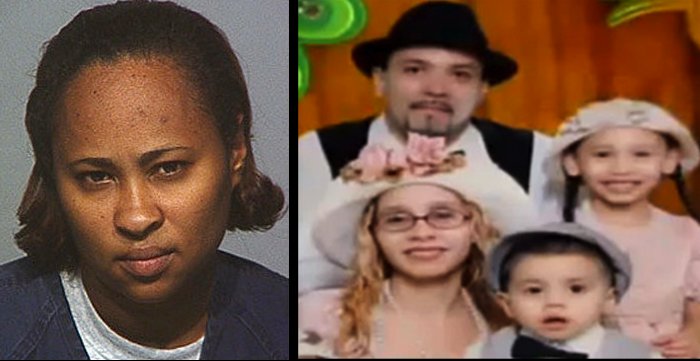 Picture this. You’re  nine months pregnant and taking a nice stroll around your neighborhood. You meet a woman who seems nice enough, and the two of you decide to hang out for the day. She offers you a ride, the two of you go shopping and so far it’s an overall good time. She invites you to her home, you go inside and bam! You’re hit from behind, discombobulated, and fighting for your life. Talk about a Lifetime movie plot; minus the predictable happy ending.

Annette Morales-Rodriguez of Wisconsin, was the star character in this story. Over a year ago, Morales-Roderiguez had faked being pregnant for months. Her supposed due date was approaching but she would have no baby to show for it when the time came. Her solution? To kill 23 year-old pregnant mother of three, Maritza Ramirez-Cruz ans steal her unborn child.

The Huffington-Post reported that Morales-Rodriguez was desperate to have a son from being pressured by her boyfriend but was unable to get pregnant. She had already claimed she was pregnant and had miscarried two times before which ultimately led to her new plan of stealing and unborn child and passing it off as her own.

Who’s to say how Morales-Roderiguez came up with this outrageous idea. Although inhumane, it’s not exactly an original concept. For the TV fans out there, a similar scenario was featured in the ABC medical drama, “Private Practice”. The difference was, the pregnant woman being cut open was a doctor, so she was able to direct the “baby-snatcher” on how to perform a proper C-section. An article from CBS News reported that Morales-Roderiguez “was trying to imitate a procedure she had seen on the Discovery Channel”. After she retrieved the baby using an Exact-O Knife, she hid the victim’s body in her basement.

Morales-Rodriguez told police she offered Ramirez-Cruz a ride and brought her to Morales-Rodriguez’s home. There, she bashed Ramirez-Cruz in the head with a baseball bat and choked her until she passed out. She said she then put duct tape over the younger woman’s mouth and nose and wrapped a plastic bag around her head. She then used a small blade to slice the victim open from hip to hip and pulled out a stillborn boy. http://www.huffingtonpost.com/2012/09/20/annette-morales-rodriguez-guilty-conviction_n_1901939.html

As it turns out, after all that Ramirez-Cruz wasn’t dead when her head and mouth were covered like Morales-Roderiguez thought. The Huff Post reported that “Ramirez-Cruz died due to a combination of blood loss, blunt trauma and asphyxiation, and the male fetus died as a result of her death, a medical examiner testified”. Medical examiners also determined that Morales-Roderiguez had not given birth.

She was charged with two counts of intentional homicide, a crime that requires a mandatory life sentence. Wisconsin doesn’t have the death penalty.

The original article never stated how much Morales wanted a child. Only that she was “desperate to give her boyfriend a son”. All this to please a man? What other types of pressure other than verbal, was her boyfriend putting on her? Could he have been abusive in some way? Maybe that’s why she took such extreme measures to please him. It doesn’t justify her actions but at least we would understand a little more as to why she went to such great lengths to have a child.