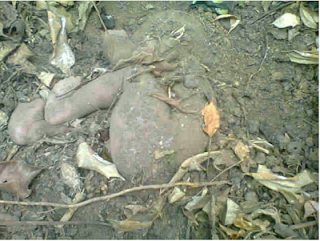 A 25 year old Nigerian man tried to kill his two month old daughter by burying her alive because his wife hadn’t had sex with him since she was born.

Onitcha Macaulay took the young baby to the bushes, dug a shallow grave, threw the baby in the grave and covered it with sand. Fortunately for the little angel, someone witnessed him burying her alive and hurriedly exhumed her after fighting and overpowering Macaulay at the scene.

The person responsible for saving  newborn Edna Macaulay, Saturday Ekama, took the baby to the police station to tell authorities what happened. Black Media Scoop reported that the child suffered a neck injury after being rescued and is currently undergoing treatment. Her father was arrested and is still in custody.

BMS also reported that when police asked Macaulay why he committed such a horrible act, he said that he “attempted to kill his daughter since she was born because his wife refused to have sex with him. He said he did it in anger and was sorry”!

This particular case of child abuse happened across the globe but that doesn’t mean it doesn’t apply to the our country too. According to Child Help, a website that informs the public on the treatment and prevention of child abuse, “the United States has the worst record in the industrialized nation – losing five children every day due to abuse-related deaths”.  That means that over three million reports of child abuse are recorded in the U.S. and that annually involves six million American children.

So what can we do about it? First, we need to get help for the abusers. Those parents, uncles, aunts, cousins or family friends that are physically or emotionally harming children. If the abusers never receive any help, it’s likely that they will continue the ongoing cycle of abuse that happened to them with their own kids. Next, we help our kids. No one really wants to talk about things of this nature but its imperative that we do. Over three million cases of abuse are reported, so think about how many have kept silent. Finally, keep reporting the abuse. If no one speaks up, no one will know or it will be too late when they find out. If we can’t get the abusers professional mental help, we can attempt to remove the abused children from their environments and into a safe and loving one.

Tell us what you think about Macaulay’s quick tempered decision to kill his child or the child abuse epidemic in America.