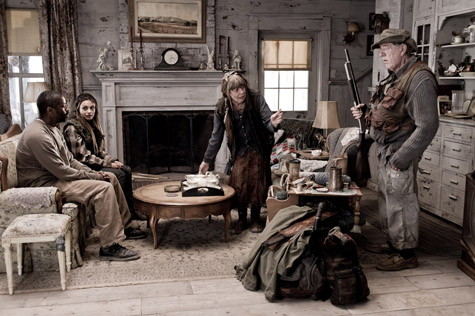 Remember the scene from the post-apocalyptic movie, “The Book of Eli” when Denzel Washington and Mila Kunis’ characters encounter the cannibals? Due to the nuclear apocalypse, food was scarce and the humans resorted to eating each other to survive because they had no other choice if they wanted to live. While cannibalism is very real, we have yet to encounter an apocalypse so not many people are fishing for other people. But one New York City cop is. Gilberto Valle, 28, was just convicted today of plotting “to kidnap and cook women to dine on their “girl meat” “.

According to Yahoo! News, Valle admitted that he had a quirky fetish for discussing cannibalism online but had never actually committed the act even though he had laid out plans to do so. During the trial, prosecutors stated that the evidence found on Valle’s computer made his plan to abduct his wife and five other women he knew known to the public. According to them, he took advantage of his position as a police offer by using restricted law enforcement databases to look up potential women to kidnap, in addition to searching the “internet for how to knock someone out with chloroform, and showed up on the block of one woman after agreeing to kidnap her for $5,000 for a New Jersey man, now awaiting trial”.

U.S. Attorney Preet Bharara said in a statement: Today, a unanimous jury found that Gilberto Valle’s detailed and specific plans to abduct women for the purpose of committing grotesque crimes were very real, and that he was guilty as charged. The Internet is a forum for the free exchange of ideas, but it does not confer immunity for plotting crimes and taking steps to carry out those crimes.

Yahoo! News also reported that Defense attorney Robert Baum stated that the decision sets a “dangerous precedent” because “people can be prosecuted for their thoughts and convicted”.  Prosecutor Hadassa Waxman said that Valle’s arrest last year, put a stop to the potential danger the women on his list could have endured.

Valle could get life in prison when he is sentenced on June 19.

Technically, Valle never actually committed any of the acts he was convicted of.  He only fantasized and thought out a plan to do so. But who knows? If given the chance or if he wasn’t arrested last year, Valle might have carried out his plan and the mother of his child and five other women would be dead right now. Did New York make the right choice to be safe than sorry?