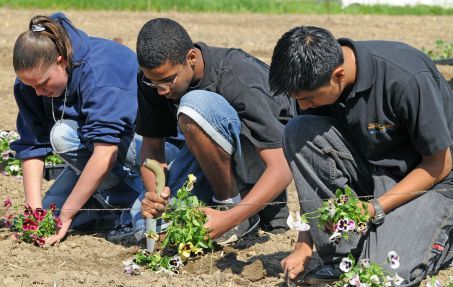 Try to convince some people to eat healthy is like trying to pull teeth . They’re stubborn, they complain and may eve decide to get out the dentist chair or up from the table in this case. Eating healthy is a choice, but the earlier you start making the decision to eat healthy, the easier it will be to stay that way. Not to long ago, wee informed of the rise in food stamps among lower income families in America. These food vouchers help Americans get just that food, and it’s not always the best food, it’s what they can afford. Healthier foods cost more in the store and that also contributes to discouraging the public from following through with eating better. Ron Finley has found a way around that.

According to Black Media Scoop, Finely, a Los Angeles native, is known as the “guerrilla gardener”. Finely realized that his neighborhood’s tendency to eat fast food all the time was killing them. So much so that he said “the drive-thrus are killing more people than the drive-byes”. So he took matters into his own hands and started planting gardens in vacant LA lots. Finely’s goal is to utilize as much of the available space (enough to fill 26 Central Parks in NYC) as the government will allow him to plant gardens for the community.

Finley plants gardens in medians and homeless shelters. He plants gardens aside urban city streets and anywhere else he can plant one without getting fined by the city.  And he uses these gardens to foster dialogue about changing the food system that plagues many urban areas in our county.

I am all for this guy and his initiative! I admire the fact that he he is taking matters into his own hands and being effective in a positive way. Instead of aiding the problem or relying on the government to provide him an outlet, he thought of way that will benefit everyone. In the video, Finely says that if kids grow their own food, they’ll eat their own food. If kids and their parents are involved in cultivating what they put in their bodies, most people are not going to let all their hard work go to waste by substituting their hard, grown vegetables for a Big Mac.

My hope is that this starts some sort of movement not only in California but in other states as well. Especially win the greatest poverty stricken areas. If this catches on, the number of food stamp recipients could decrease due to people growing a portion of their own food and that means more money to be spread round else where.

What do you think about this pioneer gardener?