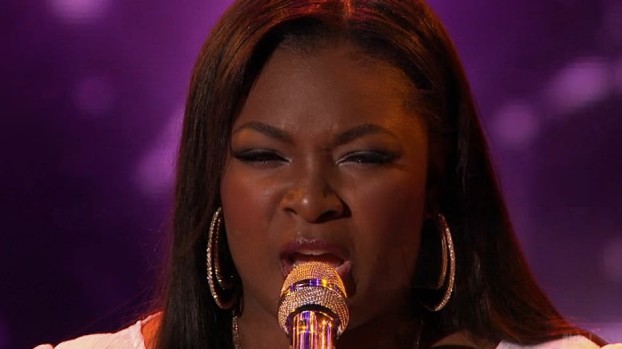 In this case, the third time was the charm! Candice Glover, 23, who often received standing ovations and was even glitter bombed by the diva icon aka Mariah Carey, has won the pioneer show, American Idol’s twelfth season! According to the Huffington Post, Glover’s when meant a break in routine over the last few years since she was the first female to win since a then teenager Jordin Sparks won during season six.

AI’s audience seemed to have favored Caucasions with guitars over the past five years but Candice came for the win, shattering the male winning streak, after previously trying out for seasons nine and eleven. According to ABC News, “the previous five winners — Phillip Phillips, Scotty McCreery, Lee DeWyze, Kris Allen and David Cook — were all Caucasian guitar players, known to “Idol” fans as WGWGs, or white guys with guitars”.

Candice called herself the “poster child for perseverance in her immediate interview after her big win. I like Candice not only for her amazing voice but for the humility she’s shown throughout the process of this competition. She acted with grace and confidence and just utilized her natural ability. Not too mention that she’s a woman of color and particular size that has busted the AI norm wide open. If you remember in times past, plus size contestants such as ninth season’s Mandisa, “Frenchie” from season two and of course the most well-off non-winner of AI Jennifer Hudson did not make it to the finales although their voices were more than qualified to do so.

Thank you Candice for believing in your talent and going after what you knew you could have. I applaud your work on the show, your beautiful, sultry voice and I wish you much success with your growing music career.

What do you think of Candice being crowned American Idol’s 12th winner? Was this season better/worse than before?