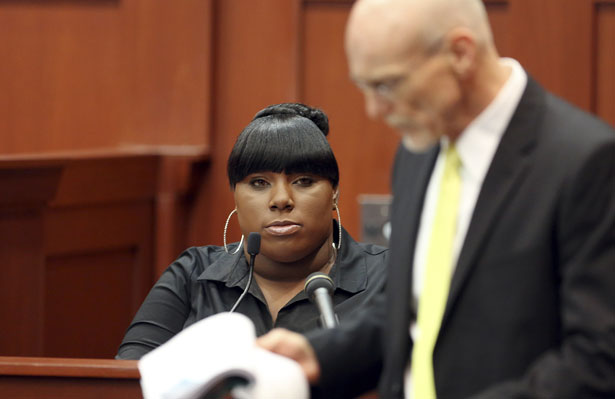 The friend of Trayvon Martin reveals another lie! The star prosecution witness is in the hot seat! Star witness in George Zimmerman and Trayvon Martin trial, Rachel Jeantel testified for the last time yesterday (June 27, 2013),  leaving behind serious doubts to her credibility after the defense attempted to pick her testimony a part. It seems as though defense attorney Don West and Jeantel had a back and forth tense almost argument going where at one point the judge actually had to cut both of them off.

At another moment,  Jeantel actually replied “that’s retarded, sir” when asked maybe Martin was lying about being followed and that maybe he was trying to attack Zimmerman. Jeantel also stated that she thought it was a racial issue because  Martin told her on the phone while he was walking that some “creepy ass cracker was following him”. The defense then asked if that statement  made it a racial issue and Jeantel simply stated “no”.  She was asked could she read a letter that her and a friend composed together to give to Martin’s mother. “I can’t read cursive,” Jeantel said and stated that she did not write the letter.

It seems as though bringing this young girl to the stand did not help the prosecution but it did not hurt them very much either. Do I feel it may have helped the defense? Yes, because she lied about her age and that can leave the jury to believe that she was lying about everything. All I could do was say that I wish they could have had someone else up to the stand. This young lady appeared easily agitated and at times seemed as though she did not even know what she was talking about. The difficult exchanges between the young womon who was on the phone with Martin before his death, revealed inconsistencies in the story she told the parents, lawyer Benjamin Crump, and to the prosecutors in the aftermath.