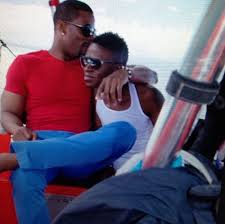 Kerry Rhodes has been silent about his sexuality since his alleged lover Hollywood Simpson has released pictures and videos about himself and the NFL Star daily! Kerry has exchanged texts with several NFL players claiming he was having sex with Kim Kardashian the same time Kanye West was. Which could allude to Kerry Rhodes being the father of Kim Kardashian’s baby. Many believe Rhodes is just doing this as a publicity stunt to keep attention off of Hollywood Simpson outing him. The pictures of Rhodes and Simpson are very blunt, it looks as though they are or were a couple!

There are many men out there who live double lives, those men that do are only hiding from themselves and hurting people. Many of them spread the disease of HIV due to their lives. Could he have been sleeping with men and women yes but was he sleeping with Kim Kardashian, that’s probably a No, but in these days and times who knows who is sleeping with who. If Kerry is actually a bi-sexual man he needs to be open with himself and his fans about it. Remember Jason Collins, Delivering on a promise he made in an essay for Sports Illustrated  in which he revealed that he was gay, Wizards free-agent center Jason Collins marched in Boston’s annual pride parade. Collins wore a T-shirt that read (hash)Be True when he joined thousands of marchers in the parade, chatting with well-wishers, greeting other marchers and holding babies as people came up to him to express their support.

Kerry Rhodes is allegedly a straight man but judging the pictures Hollywood Simpson is putting out there you would change your whole perception of him. Could Rhodes just be all smoke and mirrors a phony person or is he truly a heterosexual man. Only he knows those answers but the question of the day is did he and Kim K. actually have intercourse? Doubt it but who knows. One thing we do know with Kanye being who he is, there surely will be some hell to pay for what has been said! In the mean time check out my new book “Am I In A Bad Relationship”.