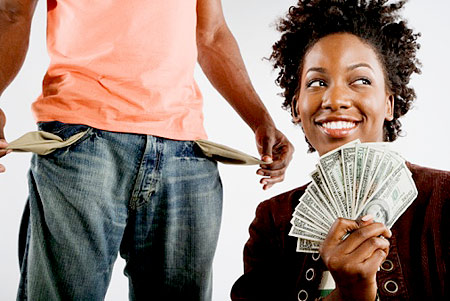 Traditionally, men are known and considered to be the providers of the family. In previous years and sometimes still today,  men were purposefully paid more than their female counterparts for the same amount of work in some places  and for years, the duty of raising and caring for children was relinquished from the male and mostly depended solely on the woman. Men were the ones who paid the bills and handled the finances and for this reason, men were the gatekeepers of the bank accounts. However, in 2013, this is simply not the case anymore. Women are now not only bringing home the bacon, they’re frying it up and placing it on the table too. So, how does this effect the roles men and women play in relationships?

According to U.S. News Health, “working wives out-earn their husbands by nearly 40 percent” and in some “American cities, single, childless women under 30 out-earn their male peers according to a 2010 analysis of U.S. census data”. I personally do not see  anything really wrong with this considering that both incomes can contribute to the family in some way, regardless of how much they consist of. However, it’s natural for everyone to NOT be okay with this.

Some men may feel emasculated by the fact that their wife or significant other is doing better financially in their career than they are. Money gives some people a sense of authority (that many believe is traditionally held by a man) and if that’s taken away, they may feel like they don’t have a stance in the relationship. Not to mention that competition can also strike in a situation like this by a man trying to compensate for making less money by trying to do a better job of taking care of the house and kids than the woman and the woman still trying to “out parent” her husband while still maintaining her professional career.

In this relationship, both individuals are harmed by each other’s physical, verbal, or mental abuse. These individuals may be high-strung individuals with large egos and high aspirations for greatness. Perhaps they have gained money from fame or a high-paying profession. Whatever the case may be, they are always in competition with each other to see who will be the most successful at what they do in their vocations.

Or, and to my female readers, I know you all are guilty of doing this at least once, will rub something like making more money than your husband in his face when you get upset or irritated by him. A cheap shot, that has lasting affects. According to US. News Health, Dr. Laura Berman, host of the Oprah Winfrey Network’s “In the Bedroom with Dr. Laura Berman”, likes to call this the “alpha woman syndrome”. Stating that this could “further emasculates a husband and puts him at risk of sexual dysfunction or losing interest in her” altogether.Yall know how you do your man sometimes with those quick tempered comments like ” With your broke a**”, or “How you gon’ pay it? You ain’t got no money” or maybe a “this MY money” type of statement.

My advice on how to keep balance in your relationship if you’re in a modern family scenario such as this is to make sure that the both of you know your worth and support each other  in it. Whether your mate voluntarily (wanting to spend more time at home) or involuntarily (losing a job) stays at home, man or woman, remember that they still bring something to the table and relationship even if it’s not of monetary value. Don’t bring each other down with your short-comings. Instead focus on building each other up and what your strengths are as a couple.